Two Candidates are Running for Rector

The Election Commission received the candidates' applications, CVs and programmes. The Commission officially declared that two candidates applied for the position of Rector of Comenius University for the term of office starting on 1 February 2023 and ending on 31 January 2027, and their applications met all requirements.

The election of the Rector takes place at the Academic Senate Assembly on Wednesday, 18 May 2022, at 9:00 a.m. in the Auditorium of Comenius University.

More information on the election 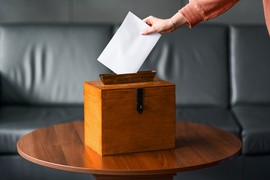