The Slovak President, Zuzana Čaputová, presented state awards to 25 notable personalities on 8 May 2022. They include experts from Comenius University Bratislava. Although the awards are given by the President to commemorate the establishment of the Slovak Republic, the actual award ceremony has been postponed until now due to the pandemic.

Professor RNDr. Milan Lapin, CSc., Head of the Meteorology and Climatology Division at the Department of Astronomy, Earth Physics and Meteorology of the Faculty of Mathematics, Physics and Informatics, was awarded the Order of Ľudovít Štúr, Second Class, for extraordinary contributions to the progess of science in the Slovak Republic. Milan Lapin is a leading climatologist who has significantly contributed to the advance of meteorology and climatology both domestically and internationally.

Professor MUDr. Michal Mego, DrSc., Head of the Second Clinic of Oncology of the Faculty of Medicine and the National Institute of Oncology, was awarded the Order of Ľudovít Štúr, Second Class, for extraordinary contributions to the progress of science in the Slovak Republic, particularly in the field of oncology. The medical doctor and scientist of the Faculty of Medicine at Comenius University and the National Institute of Oncology in Bratislava is also the chief expert of the Ministry of Health for clinical oncology. 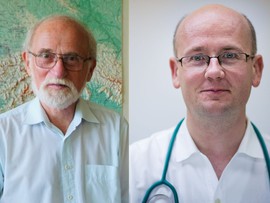