Scientists have named the longest legless lizard in the world

Bratislava, 30 April, 2021: Scientists have described a new subspecies of lizard from the Middle East. In the areas where they occur, the unique anguid lizards are mistaken for snakes and killed needlessly. However, they have several features which distinguish them clearly from snakes. Early in April, an international team of scientists led by zoologist Daniel Jablonski from Comenius University Bratislava published a study on anguid lizards in the Vertebrate Zoology journal.

As early as 2018, while working on the genetics of two subspecies of the European glass lizard (or sheltopusik) scientists unexpectedly discovered an unknown evolutionary lineage in the Middle East that did not correspond with the known taxonomy of the only living member of this old genus of legless anguid lizards. Until then, only two sheltopusik subspecies were known - Pseudopus apodus apodus which occurs between Crimea and Central Asia, and Pseudopus apodus thracius which lives in the Balkans and Western Turkey. However, in the Levant, or the Middle East, anguid lizards have long lived in isolation, which has led to the evolution of specific morphological and genetic features. According to the established taxonomy, they represent an as-yet-unknown subspecies.

In the present study, researchers from Comenius University, together with colleagues from Europe and Asia, focused on populations of anguid lizards in the Levant. They studied the morphology, genetics and biogeography of this unknown evolutionary lineage on numerous individuals, mostly from Israel. They compared several hundreds of animals from almost the entire area where these anguid lizards occur. The results allowed them to name this unknown subspecies as Pseudopus apodus levantinus. "We have shown that the discovered lineage is clearly different from the other two which allowed us to classify it taxonomically. The history of the new lineage probably dates back to the Pliocene which makes it several million years old," explains Daniel Jablonski from the Faculty of Natural Sciences of Comenius University.

Current knowledge leads us to assume that the anguid lizards from the Levant probably never met the other two subspieces. Their territory is rather isolated and is smaller than Slovakia. With a length of up to 140 cm, the newly discovered lizard is the longest legless lizard in the world. Scientists believe that their size and robustness may have been the reason why they became a part of the diet of the Natufians, inhabitants of the Levant 15,000 years ago, as shown by recent archaeological research discovered in Israel.

"This project was unique to me. Anguid lizards are amazing and in many ways, unique creatures, and the new taxon helps explain the puzzling question of the large number of unique animals in the Levant. Thanks to the species distribution, this research has enabled me to connect all the main regions I am currently working on - the Balkans, the Middle East and Central Asia," says zoologist Daniel Jablonski. Defining the taxonomic status of animals and plants opens further research, but also allows their conservation.

The research was supported by a grant from the Agency for the Support of Research and Development of the Slovak Republic under the reference APVV-19-0076. 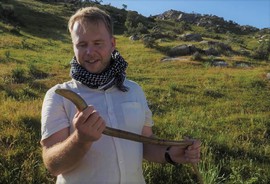 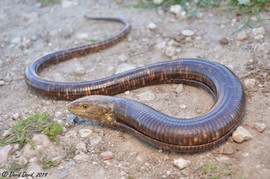 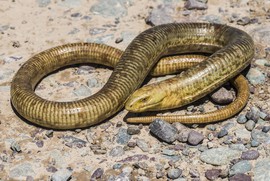 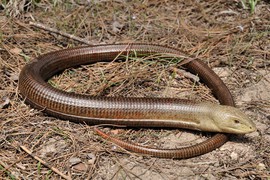