Comenius University has achieved the best ranking, 165th, in the “Teaching” indicator, making it into the “Golden League”, or the second hundred. This parameter evaluates the proportion of students and teachers, the number of bachelor's degrees or doctorates awarded per teacher and the overall reputation of the school.

In addition to Teaching (which has a weight of 40%) the areas of Research (40% weight), International Diversity (10%) and Financial Sustainability (10%) were evaluated. The ranking has been covering 1,150 leading universities from 85 countries since 2010.

The ranking is published by RUR Rankings Agency in partnership with Clarivate Analytics which analyses scientific and academic research published in peer-reviewed journals. The RUR ranking is one of several world rankings which focus on research universities.

"This is another piece of good news for Comenius University at this difficult time, when we need to defend the necessity of raising the funding for science. Last week, we overtook all Slovak and Czech universities in the THE Impact Rankings. We are pleased with these successes and we believe that they will strengthen the view that scientific research deserves support," said Comenius University Rector Marek Števček.

Comenius University is the only Slovak university to appear in other rankings as well. In the Times Higher Education Impact Ranking it ranked 301st - 400th and even placed 29th worldwide because of its research into key diseases and diagnoses, 37th for research in the field of peace, justice and strong institutions. In the Shanghai Ranking CU ranks 601st - 700th. It ranks 572nd in the prestigious Best Global Universities ranking and 701st-750th in the QS World University Rankings. In the NTU Ranking (National Taiwan University Ranking), it achieved significant success in the subject of physics, by placing 252nd worldwide in 2020. In THE WUR ranking CU ranks 1001+. 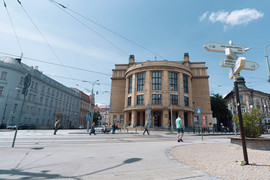