Slovak Universities: Struggle for Survival Instead of Reforms?

Bratislava, 1 February 2022: For two years, Slovak universities have been at the forefront of the fight against the pandemic, yet they enter 2022 with serious fears for their own survival. Repeated announcements indicating cuts in state subsidies, combined with revenue shortfalls and radical increases in energy prices arrive at a time when the universities need to do their utmost to return to on-site learning. On top of this, they need to meet the strict requirements of new accreditation standards like internal quality assurance systems, and work on revamping their internal administration systems. All of this is happening at a time when the parliament begins to discuss a controversial amendment to the Higher Education Act.

In 2022, Slovak universities will receive EUR 27 million less in state funding than last year, while another EUR 18 million are earmarked for centres of excellence. Although we welcome the support of centres of excellence, we believe this support should come from additional resources rather at the expense of existing subsidies. The sharp rise in the prices of energy and materials is another problem which complicates the day-to-day operation of universities, significantly jeopardizing ongoing European projects. According to preliminary calculations, universities in Slovakia will face a shortfall of more than €12 million in energy costs alone. This year, Comenius University estimates it will pay at least €5 million more for energies than last year. The shortfall in commercial income due to the COVID-19 pandemic compounds the planned reduction of subsidies and the radical rise in energy prices.

All of this means that universities will need to cut development projects and renovations, increase prices for dormitory housing, cancel study programmes and lay off some of their employees. The economic situation of Slovak universities is alarming and it will have considerable social impacts, affecting particularly students. All of this is happening at a time when universities need to make every effort to cope with the new, stricter accreditation rules. Additionally, in February, the National Council of the Slovak Republic will begin discussing an amendment to the Higher Education Act, which has been hotly contested by the universities.

"Our university trains doctors, judges, pharmacists, psychologists, speech therapists, teachers, computer scientists, historians and many other professions. Our experts sequence virus genomes and calculate models of how the pandemic will spread. Failure to finance public universities can cause irreparable damage to the entire Slovak society. Once a department or program disappears due to economic restrictions, it might never be restored. This applies particularly to study programmes which may be local, but play an irreplaceable role in Slovakia. Once they disappear, no-one will be able to study them in Slovakia at all - leading to more student-drain and a legitimate absence of internationalization, because foreign students will not feel attracted to come here either, " said Marek Števček, Rector of Comenius University. "Politicians declared a desire to reform universities. However, under these conditions, we can hardly consider development when we have to fight for bare survival, " added the rector of the largest Slovak university.

"The Slovak University of Technology entered the new year with a provisional budget. We had no idea how much money we would get from the state and the rules governing the distribution of state subsidies to Slovak universities in 2022 were unclear," said Oliver Moravčík, Rector of STU. "This is not a good way to foster improvements in quality. We call on the Ministry of Education and on the Government of the Slovak Republic to prevent further destabilization of the academic environment. It is crucial for our economy to offer quality professional training and educate capable computer scientists, architects, mechanical engineers or food chemists. In the current situation, however, even the best of managers would be hard pressed to find adequate tools to guarantee growth," he added.

All three statutory bodies representing universities have now joined the Rectors of Comenius University and STU in expressing concerns about the situation of Slovak public universities: 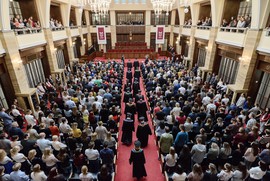