Bratislava, 17 June 2022: Last week, QS World University Rankings published its 2023 ranking of the best universities. Comenius University Bratislava ranks 651st - 700th like one year before. It improved its position by 100 places in the last three years and is the best ranked Slovak university.

The best universities in the world are the Massachusetts Institute of Technology (MIT), the University of Cambridge and Stanford University.

When evaluated by subject, Comenius University achieved a respectable ranking in physics and astronomy - 401st to 450th place, in medicine it ranked 451-500th and in biological sciences it ranked 601st - 640th. Comenius University ranks 58th out of 400 universities in the QS EECS University Ranking of Eastern Europe and Central Asia.

QS World University Rankings has been evaluating universities since 2004 in collaboration with analysts from Elsevier. This year, the ranking published a list of the 1,400 best institutions from nearly 100 countries around the world.

"We usually take rankings with a grain of salt because each is based on a different methodology and takes into account different factors. Nevertheless, I am pleased that we have managed to maintain a good position which borders on excellent in some study programs. This is a consequence of the huge commitment of researchers who are delivering world-class performance in spite of the constant budget cuts. It is also a reason why we implore the Slovak government to reconsider the continuing reduction of spending on our higher education. Funding is the only way to allow us to attract the best people, improve our performance, and rise in the rankings,“ thinks the Rector of Comenius University, Marek Števček.

Comenius University is the only Slovak university which regularly makes it into major rankings. In the Round University Ranking, it achieved the 426th position and ranked 178th in the education key dimension area. It currently ranks 630th in the CWUR rankings. In the Shanghai ranking (ARWU), CU ranks 801-900, while in physics it ranks 301st-400th worldwide. It ranks 587th in the prestigious Best Global Universities ranking, and in physics it ranks 244th. The SCImago ranking puts it in 573th place. In the NTU Ranking (National Taiwan University Rankings) it is ranked 701st - 750th, and in physics it ranks 275th worldwid. In The Three University Missions MosIUR ranking it ranks 272nd, THE Impact Rankings ranks it 601st - 800th. THE WUR ranking ranks CU in the 1001st-1200th band. 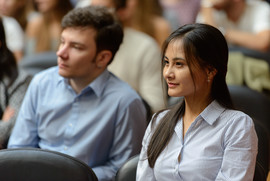