This political interference takes the form of, in particular:

-     the amendment to the Higher Education Act proposed by the Ministry of Education, Science, Research and Sport of the Slovak Republic (the "Ministry"),

-       the financial policy of the Ministry with regard to public universities, which has been in force since the beginning of this calendar year and aims to further reduce financing for public universities that have already been long under-funded.

These measures will lead to a total subordination of universities to the ministry. 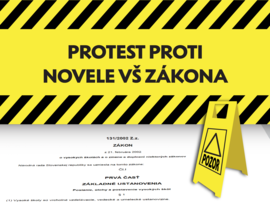