University will not close after 17 November, but remains on protest alert

Bratislava, 26 October, 2022: A meeting of representatives of the academic community was held today in CU’s Auditorium to discuss further course of action of Comenius University Bratislava in relation to the announcement of the Slovak Rector's Conference that tuition would be suspended after 17 November. It was attended by the management of the university, faculty deans, leaders of academic senates, and others. The representatives of faculties relayed information about the progress of discussions at their faculties and about the opinions of both students and employees. Academic community representatives finally agreed on the following position.

In difficult times like these, Comenius University Bratislava is fully aware of its social responsibility. At the same time, it takes into consideration a pronounced change of the way in which the Minister of Education, Science, Research and Sport of the Slovak Republic communicates, viewing this communication as constructive. After the demands formulated by the Slovak Rector's Conference on 13 September 2022 were partially satisfied, the representatives of CU’s academic community agreed that tuition would not be suspended on 17 November 2022. Comenius University, however, remains on protest alert. It resolutely demands that competent authorities, at the earliest possible opportunity, present a solution to the current situation which would be systemic, sustainable and predictable. At the moment, universities expend all their energy on ensuring basic survival and have no room to support any significant development.

CU’s academic community representatives agreed to give the Rector of Comenius University the mandate to continue negotiating with the government and with the representatives of the Ministry of Education, Science, Research and Sport, aiming to meet the demands of public universities as outlined in the resolution of the Slovak Rector's Conference from September 2022.

Comenius University wants to stress that it never intended to turn its students into hostages. Nevertheless, and considering the current trend in the financing of universities, the insufficient compensation of increasing costs associated with high inflation, the rising prices of goods and services, and an absence a solution to the current situation, it cannot completely rule out that it might need to restrict its functioning partially or fully in the upcoming period. 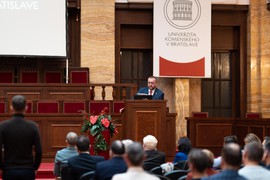