Bratislava, 19 September 2022: Today, the 104th academic year begins at Comenius University Bratislava. After two years of the pandemic the university was planning to return to normal in this semester. However, this semester opens to even more uncertainty than ever before. If the costs caused by the energy crisis are not compensated, higher education institutions will be forced to close their gates on 17 November and stop providing their service to society.

At a ceremonial assembly of the academic community, the Rector awarded the Gold Medal of Comenius University to Professor Ján Čižmár in recognition of his extensive contribution to the elevation of the national culture and learning, particularly through his publishing and translation activities, which firmly establish Slovakia as a part of the cultured and civilized Europe.

Up to this moment, more than 23,000 entrants have enrolled at Comenius University to study in the academic year 2022/2023; 64 % of them are females. Enrolment is still ongoing and so the figures are not yet final. More than 6,100 students will begin their first year of study. Comenius University will also host over 3,500 international students, most of them from Ukraine (606), followed by Germany (520), Austria (335), Norway (270) and Iran (202). Medicine taught in Slovak and in English, followed by Law, and Pharmacy, are still the most popular study programmes.

The energy crisis looms as the biggest challenge of this year. The largest Slovak university faces a deficit in its energy bill of some 5.5 million euros this year alone. It only has contracts for the supply of electricity at today’s prices until the end of the year. Next year’s electricity prices will depend on the movements on the market, and even electricity suppliers cannot predict their development.

For several months now, the university has been looking at ways of achieving savings by, among other things, carrying out energy audits of its buildings and optimizing energy consumption. Each of these projects, like 'ACCORD', includes specific measures that contribute to energy savings. The Faculty of Mathematics, Physics and Informatics is probably the first Slovak faculty which has built its own photovoltaic power plant. More work is being done under ‘Green Dorms’ projects, and the ongoing renovations of dormitories also already contain energy-saving elements.

Throughout the month of September, the university management will continue to discuss further consumption-reducing measures with the faculties. The university estimates it can reduce its consumption of energy through saving measures or reduced heating by 10-15 %, while the increase of prices is in the hundreds of percent. The threat that the university will be unable to keep its buildings operational is very real.

In this situation, and on the verge of collapse, Comenius University approached both the Ministry of Education and the Ministry of Finance. So far it has received no concrete response or measures amounting to financial assistance.

„Universities are islands of culture, learning and reason. Institutions, however, are only as functional as the people they consist of. I believe universities constitute a specific ecosystem and I still harbour hope that we can reverse this trajectory of decline. By seeking refuge in each other, in science, and in learning, we aspire to cheer up and to take the metaphorical vaccine against ignorance, misery and malice which daily accost us. And that is the core of our mission, and of our duty: to resist resignation and to keep rowing against the current, hoping that one day, a pilot rises, perhaps from among us, who will transform the synergy of our efforts into the energy that is needed to change that trajectory,“ said Marek Števček, Rector of Comenius University at the opening of the academic year. 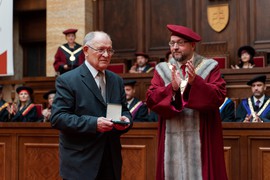