Medicine is no game

Leonidas Katsikaris is from Greece and studies at the Faculty of Medicine of Comenius University in Bratislava. He is in his fourth year now. Medicine is a very difficult field, he confirms, and you need study hard to pass. Still, Leonidas finds time to share his life in Bratislava with fans on Youtube.

Leonidas already studied Classics at the Thessaloniki university before coming to the Faculty of Medicine. Why did he choose medicine? Leonidas loves the numerous opportunities that this field offers. His mother is a laryngologist. „In my family, everyone is a doctor, so I was kind of pushed to be a doctor too. I also chose medicine, because it is like an open file. It gives you a lot of opportunities for the future. I am sure, that through medicine, you can find something that you like.” Also medicine guarantees a secure employment. „Healthcare is always needed, and particularly so now, in a pandemic. Work in healthcare is top of the list among jobseekers at the moment,“ he explains.

Bratislava's strength is its location

He has been in Slovakia for 3 years now. He lives in a flat because he likes to live comfortably. The faculty offered him an opportunity to stay at a dormitory, but he just loves the space of an apartment. Leonidas likes Bratislava a lot. The size of the city suits him well, because he lived in a smaller town in Greece, too. The thing he appreciates most about Bratislava is its location. „I think that the location is ideal – we are in the centre of Europe, we can travel to various countries, we can meet a lot of different people from different cultures. Bratislava has good transportation, even if it is a large city. In my hometown in Greece, we did not have trams, but Bratislava has them. I also like the fact that Bratislava has a lot of shopping malls. I think it's a lovely city and my favourite part is the old town. It's a great city to have a good time, to study and to hang out with friends.“

The rumours that medicine study is hard are true. Students have three exams per subject, and those exams are truly difficult. As usual, they have to accumulate a number of credits per semester. In this way professors select the best students and then decide which of them are going to become doctors in the future. „Only the best students become future doctors. It is true that many students fail the more difficult subjects. Most of them fail because medicine is not what they really wanted to do,“ says Leonidas.

Young med students, of course, need to accumulate a lot of practical experience during their study. The fourth year curriculum includes a lot of clinical practice. Students visit hospitals and hospital departments in Bratislava nearly every day. Leonidas did clinical practice in the hospitals of Kramáre, Ružinov, Mickiewiczova and the hospital of the Merciful Brothers.

„We visited different departments - in Kramáre, for example, we did practice in paediatric surgery and in the department of geriatric medicine. Working with different patients means that we learn a lot of new stuff. As you acquire clinical experience, you build new knowledge and obtain tips from the doctors, who show you the correct surgery procedures. Essentially, we are learning what the daily life of a doctor looks like. Every year we have different subjects with the corresponding clinical exercises. Right now, we do neurology, and so we will practice in a neurology clinic,“ explains Leonidas.

He thinks that in comparison to Greece Slovak hospitals are equipped sufficiently. „I think my favourite location is the Kramáre hospital, because it is very spacious and well-equipped. The paediatric surgery department is particularly modern and has a lot of equipment. I like its interior design which I think is very attractive for children. I think the doctors there are real professionals,“ he adds.

The problem is, even according to other doctors, that there are no „dynamic“ hospitals in Bratislava and sometimes it is hard to cover every specialization. „For example, if a neurosurgeon is needed, they need to be called from another hospital. This is very timeconsuming for the patient. It's a downside. But for the students and their practice though, the current system is more than sufficient.“ Leonidas really likes how well the faculty is equipped. The classrooms and their equipment are very modern and, at least according to him, technologically sufficient. He also likes the renovated building of his faculty and its location in the city.

Complete routine with the patients

„Another thing I like about working in practice is that you have to build a routine. You are learning how to use your stethoscope to listen to different sounds in the lungs or the heart, and you can feel the patient, which is really important. You need to build rapport with the patient, you need to know how to behave, how to communicate a bad diagnosis to your patient. I think there is a complete routine with your doctor and also with your patient.“

Have the doctors been helpful during his practice? According to Leonidas, it depends on the doctor's personality. He worked with some young doctors, who were really friendly and wanted to teach their students a lot of useful stuff. „On the other hand there were also doctors who were older and stricter. They told us that medicine was no game. You had to concentrate a lot. Then there were also doctors who were not only extremely strict, but wanted to show off a bit. However, this is probably the reality in any hospital in the world, not just in Bratislava,“ Leonidas thinks.

He has no particularly bad memories related to his practice though. He remembers some moments when the doctors were asking students questions about topics the students had not had the opportunity to study yet. „I am sure that they were doing it just to push us to study harder. But not everyone is tactful and some of the doctors can get a little bit rude. I know that's because medicine can be hectic. It changes your nature over the years. So I can kind of excuse it.“

Leonidas hopes that after school he can become an internal medicine doctor. He can also imagine his future in the field of laryngology. Does he want to stay in Bratislava? He really likes Bratislava and finds it very beautiful. But his dream country is the Netherlands, so he is trying to learn Dutch. „I think that the health care system in the Netherlands is among the top ten in Europe, and I prefer the quality of life there,“ clarifies Leonidas. He speaks German very well, is now learning Dutch and speaks some basic Slovak. „In Slovak, I understand medical terms and I know how to order something, but it's a really hard language for me. I had some private lessons with a Slovak tutor and that helped me a lot to learn the basics.“

Despite the fact that he studies and does practice at the same time, he spends a lot of his free time on Youtube. He really likes vlogging. His Youtube channel is called leoskats and has 310 followers, but some videos have thousands views. „I created my YouTube channel for fun. I just wanted to help people who want to study abroad as international students. In preparation for the exams, I looked for videos or vlogs made by students here. The reason I created it, was because I couldn't find anything like that on Bratislava. Making vlogs about university-related stuff is one of my favorite things to do for YouTube. For example, I vlog about how students can prepare for studying here, what to expect and how hard it will be. Furthermore, I want to show the city of Bratislava to students, so they can see how amazing it is to live and study in this city in the heart of Europe for six years,” explains Leonidas.

Through his videos he shows his viewers life at a university, daily routines of students and the student life in general. His most popular videos are those about tours to Comenius University, in which he informs about the academic structure and about the program. His videos are not just for fun, but they also have educational value. He uses Youtube to explain medical concepts to his viewers.

„Many students from Slovakia and even from other European countries texted me that they would like to study at the Faculty of Medicine. In this way I think I am helping many people. The downside is that Youtube can be very time-consuming. It gets really hard to balance student life, practical exercises and Youtube. But I still like it a lot,“ thinks Leonidas. 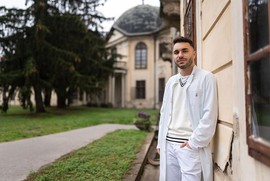 Leonidas is in Slovakia for 3 years now Photo: Tomáš Madeja