Bratislava, 18 December 2018: In June 2019 the National Bank of Slovakia will issue a silver memorial coin with a nomimal value of ten euros on the occasion of the 100th anniversary of Comenius University in Bratislava. A proposal by Patrik Kovačovský was selected by an expert committee.

The competition saw ten works submitted by seven authors. The committee recommended the first prize and implementation to a project by  Patrik Kovačovský. “This proposal best shows the essence of the first national higher education institution in Slovakia,” said the committee in assessing the creative proposals for commemorative coins and collector coins. The committee’s expert advisors during evaluation were Dr Ľubica Kázmerová, representing the Institute of History at the Slovak Academy of Sciecnes, and Associate Professor Vincent Múcska, who is a Vice-Rector of Comenius University.

The second prize in the competition was awarded to another design by Patrik Kovačovský alongside a design by Mária Podlaufová. A third prize was not awarded. Another prize for the quality of the submitted proposal was awarded to Vladimír Pavlica.

“The university’s centennial anniversary falls on 27 June 2019. In connection with this celebration of the largest and oldest university in Slovakia, a special postal stamp and medal will also be issued,” said Comenius University Rector, Professor Karol Mičieta. Slovenská pošta will issue 200,000 special postal stamps with a nominal value of 1.90 euros. The motif will be a portrait of John Amos Comenius, the facade of the Comenius University historical building, and the rector’s mace alongside the symbol of the Slovak Republic.

Similar motifs will also be present on the university's commemorative medal, which will be made at the Kremnica Mint. The observe of this silver medal features the portrait of John Amos Comenius, and on the reverse there is the historical building of Comenius University on Šafárik Square. The author of this work is Dr Alojz Drahoš, who works at the Department of Fine Art Education at the Faculty of Education of Comenius University. The proposal was selected by a committee whose members, in addition to representatives from the Comenius University executive, included the rector of the Academy of Fine Arts, Professor Stanislav Stankoci, and the head of the Department of History of Visual Arts at Comenius University's Faculty of Arts, Associate Professor Katarína Kolbiarz-Chmelinová. 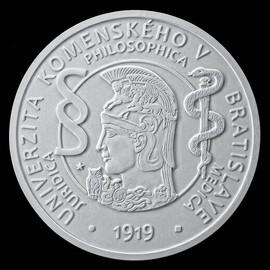 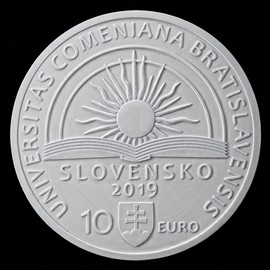 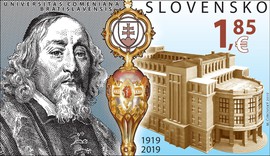 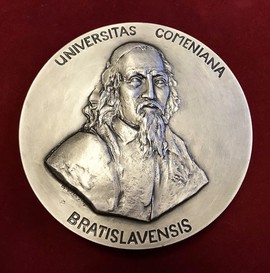