The Dean of the Faculty of Arts, Professor Martin Slobodník, has died

It is with great sorrow that we announce the sudden passing of our Faculty of Arts, Professor Martin Slobodník, on Sunday 14 April 2019.

Professor Martin Slobodník (1970–2019) was a graduate of the Faculty of Arts of Comenius University in Bratislava, having majored in the Chinese language and culture. During the Velvet Revolution, he was an active member of the Students’ Movement. As a Humboldt Scholarship holder, he spent time studying at the University of Bonn. In 2016 he was appointed a Professor of Oriental Languages and Cultures. His research focused on the history of Chinese–Tibetan relations and religious policy in China. He was one of the foremost academic personalities at the Faculty of Arts.

From 2007 to 2013, Slobodník was the head of the Department of East Asian Studies at the faculty. From 2013 he was the faculty’s vice-dean for development and information technology and later on also for international relations. He was the dean of the faculty from 1 February 2019.

Professor Slobodník advocated for the strengthening of the role of the university in social matters, and he was prominent in defending the importance of the humanities and social sciences, which he saw as playing an important role in determining a society’s direction. In his short time as the faculty’s dean, he promoted a vision of the faculty as a modern, transparent, and flexible non-bureaucratically functioning and socially engaged institution which belongs among the very best education and research institutions in Slovakia. Alas, he did not live to see the fulfilment of many of his plans.

May he rest in peace.

The funeral service for Professor Martin Slobodník will take place on Thursday 18 April 2019 at 9:30 am in the Crematorium. At 8:30 am an articulated DPB bus will be available on Vajanského nábrežie in front of the Moyzes Hall to transport employees who wish to take part. After the funeral, transport will be provided back to Vajanského nábrežie. 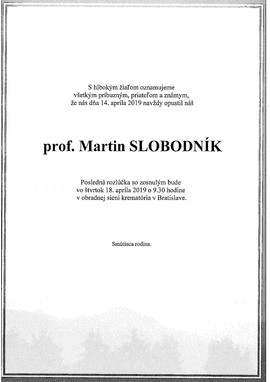