Bratislava, 19 June 2018: Today Professor Joseph Wang from the University of California, San Diego, was awarded an honorary doctorate from Comenius University in Bratislava. This renowned scientist and inventor in the field of nanobioelectronics and nanomachines thus became the 123rd personality to receive a Doctor honoris causa (Dr. h. c.) from the university.

Professor Joseph Wang is the head of the Department of Nanoengineering at the University of California, San Diego, and the director of that university’s Center for Wearable Sensors. His scientific interests are focused on nanobioelectronics and nanomachines with a particular emphasis on the development of progressive nanomachines, nanorobots, nano-converters, bioelectronics, electrochemical biosensors, wearable sensors, and progressive materials for energy accumulation. He is the author of more than 1050 articles, which have been cited more than 95,000 times. His Google Scholar H Index is 151.

“Professor Wang considers the most exciting part of his research to be the ability to make headway on new topics and explore boundaries. We are very pleased and proud that this exciting investigation is being shared with our scientists and doctoral students. As a current message to Slovak society and its political leaders, I would like to repeat his statement that ‘investment in science and technology, and in education in general, is the key for economic growth,’” said Comenius University Rector, Professor Karol Mičieta.

Professor Wang was a significant contributor to forming cooperation with Slovak scientists from the Faculty of Mathematics, Physics and Informatics of Comenius University: “We have been working with Professor Wang since 1997 on the development of biosensors, which is already over twenty years. In this time we have completed two projects with him in the NATO natural sciences programme and the NATO Science for Peace programme, where he was the main investigator. Thanks to these projects, it has been possible to equip the biophysics centre at the faculty’s Department of Nuclear Physics and Biophysics with new scientific technology,” said the faculty’s dean, Professor Jozef Masarik. Since 2016 Professor Tibor Hianik and Professor Wang have been working together on a FORMILK project within the EU’s Horizon 2020 programme.

Comenius University scientists and Professor Wang have jointly published many articles in prestigious academic journals. In 2009 they co-edited a special issue of the Electroanalysis journal, which was dedicated to biosensors based on DNA aptamers. These joint projects have also allowed several doctoral students from the faculty to spend time at Professor Wang’s places of research in the United States.

“I am deeply honoured to have received an honorary doctorate from this historical and celebrated university, an institution with many years of academic excellence which is located in one of Europe’s most cultured and beautiful cities. I accept this honour with the greatest gratitude and pride. Comenius University has a significant influence on both a national and international level. I am very proud of the close and longstanding cooperation with the Slovak scientific community, and particularly with Comenius University,” said Professor Wang in accepting the degree.

Comenius University awards honorary doctorates to important Slovak and international figures who have significantly contributed to the development of education, science, culture, democracy, and human values, and who have personally helped bring about civilizational progress by spreading learning and humanism.

Joseph Wang is the 123rd person to receive an honorary doctorate from Comenius University. Others who have received this honour include the former UN Secretary General, Ban Ki-mun (2015); the world-renowned microbiologist, Ján Vilček (2014); the winner of the Nobel Prize for Chemistry, Gerhard Ertl (2009); and the 14th Dalai Lama and winner of the Nobel Peace Prize, Tenzin Gyatso (2000). 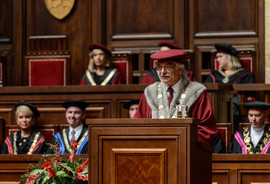 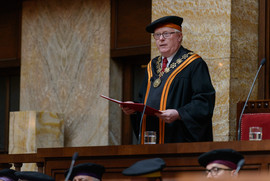 Prof. Jozef Masarik, the Dean of the Faculty of Mathematics, Physics and Informatics of CU, which nominated Prof. Joseph Wang for the doctorate 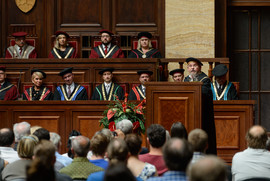