Researcher in Science Magazine: Bodies of little-known amphibians trapped in their amber grave

Bratislava, 6 November 2020: They sat on a twig and ambushed their prey by ballistically projecting their tongue like chameleons. Amphibians with the tongue-breaking designation of Albanerpetontidae lived on Earth for an incredible 165 million years and only became extinct a "recent" 2 million years ago. The bodies of a new species representing one of them, perfectly preserved in amber, could now be examined by scientists. The prestigious Science Magazine is publishing an article about these unique findings today. Andrej Čerňanský, an evolutionary biologist and palaeontologist from Comenius University is a member of the international team of authors.

The extinct group of albanerpetontid amphibians lived on Earth between the Middle Jurassic and the Early Pleistocene periods. Their fossils are found on several continents of the northern hemisphere - in North America, Europe and Asia. Scientists, however, know little about these animals because only parts of their bodies were available. An assumption was, for example, that they had lived underground. Representatives of this amphibian group were seen in all their beauty for the first time thanks to cretaceous amber from Myanmar. Amber from Myanmar (former Burma) dating back 99 million years has already revealed preserved fossils of insects, scorpions, plants and dinosaur feathers.

Discoveries in the amber described in the Science paper also include preserved soft tissues such as eyelids and the remains of the tongue. "When you look at such discoveries under a microscope, you need to remind yourself that the animal lived 99 million years ago. The perfect preservation in amber makes it look like something that has only died recently. It is a really unique find for palaeontology," says Dr. Andrej Čerňanský from the Faculty of Natural Sciences of Comenius University.

Albanerpetontidae are even more surprising than scientists ever dreamt of. They lived in the trees, rather than underground - and behaved like chameleons. They had an extending tongue whose mechanism was more similar to chameleons’ than any other amphibians. The striking fact is that this adaptation evolved 100 million years earlier in albanerpetontids than in chameleons. The shape of the pelvis of both groups is also very similar - their legs extend under the body, which is an adaptation allowing them to grip leaves and branches.

"When I studied the findings last year in Bangkok, Professor Susan Evans of University College London said at one point with a smile that Christmas had just arrived early for us this year. She captured the feeling of reverence in all of us who had the opportunity to see these animals in amber for the first time in the history of science” the scientist from Comenius University describes the unique experience. He contributed to the discovery with his colleagues from the Sam Houston State University, the Florida Museum of Natural History, the University of Bristol and University College London.

Albanerpetontids in amber represent a new genus which was named Yaksha peretti. Their morphology was studied in detail using computer tomography (CT). Another interesting fact is that the part of Asia - Myanmar - where the animals were found, was an island at a time when the sticky resin of trees trapped this treasure forever. The island separated from Australia and travelled north, where it eventually became part of Asia.

Mgr. Andrej Čerňanský, PhD., works at the Department of Ecology, Faculty of Natural Science of Comenius University. He obtained his masters degree at the Department of Geology and Palaeontology, Faculty of Natural Science of Comenius University and in 2011 he received his doctorate there. He began working at the Slovak Academy of Sciences and in 2012 he was awarded the prestigious Humboldt scholarship which allowed him to spend more than two years at the Senckenberg Research Institute in Frankfurt am Main. From there he moved to Berlin where he worked as a researcher at the Museum für Naturkunde. He is currently assistant lecturer focusing on evolutionary biology and vertebrate palaeontology. He has published more than 60 scientific papers and is the co-author of the book Messel - An Ancient Greenhouse Ecosystem. In 2018 his discoveries earned him the nomination for the Crystal Wing award in the category of science and medicine. At the moment he is the principal researcher for VEGA grant 1/0209/18. 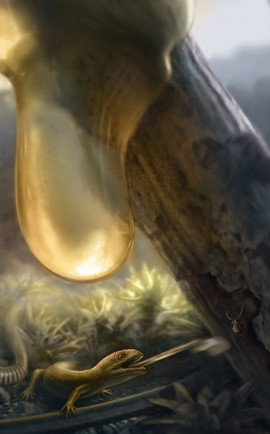