CU Research: Mental health of students deteriorates as a result of the pandemic

Bratislava, 22 February 2021: Researchers from Comenius University Bratislava studied the mental health of CU students and staff during the coronavirus pandemic. The research shows that depression and anxiety increased twofold since 2018, confirming that the global pandemic has had a significant impact on the life of university students. Comenius University researchers, Doctor of psychology Michal Hajdúk and Professor of psychiatry Ján Pečeňák presented the results at an online press conference today.

One third of students experience fairly severe symptoms of depression and one in five suffer from long-term effects of increased anxiety. This is the main outcome of a research project conducted by psychologists and psychiatrists from various CU units under the auspices of CU’s Research Center for Mental Disorders. An online questionnaire was completed by 1786 students and 166 employees of Comenius University between 4 and 27 December 2020. The survey ran against a backdrop of dynamically deteriorating epidemiological situation and of restrictions which significantly affected the holidays and their customs.

Using standardized methods, the researchers evaluated various aspects of perceived depression, anxiety, social anxiety, the presence of any symptoms of psychoses, risky alcohol use, perceived stress, loneliness, everyday functioning and sleep issues. The survey also included questions related to online tuition. Researchers were studying how the students coped with distance learning and how teachers dealt with the online teaching process.

As is usual in this type of research, the majority of respondents were women - 80% in case of students and 69% in case of staff. Some 62% of the participating students were in a bachelor programme, 35% were in a master/doctoral programme and 3% were post-docs.

Almost a fifth of the students (18.6%) who took part in the survey reported that they had been diagnosed with a mental disorder in the past, the most common being anxiety disorders, depression and eating disorders. Other mental disorders, such as Attention Deficit Hyperactivity Disorder (ADHD) and learning disabilities, bipolar disorder, addiction, schizophrenia, and autism spectrum disorders, were reported less frequently. One tenth of the student respondents (9.7%) is being treated for mental health issues.

While students and teachers rate their physical health as average or fairly good, students rate their mental health as significantly worse than teachers. "This difference in the perception of one's own mental health is probably related primarily to a greater stability at work or in relationships among older participants, leading to a weaker negative impact of anti-epidemic measures and milder negative experiences. Different age groups respond differently. Older people are not so sensitive to external changes," explains Michal Hajdúk from the Department of Psychology of CU’s Faculty of Arts.

Manifestations of depression are experienced by 34.3% of the students and manifestations of anxiety by 20.1% of them while 16.5% of the students perceived an increased level of both anxiety and depression. This is a twofold increase over data from 2018. "A Czech epidemiological study reached similar conclusions regarding the increase in depression and anxiety and discovered that the increase in mental disorders was highest among young people," explains psychologist Michal Hajdúk. More severe symptoms of depression were reported by 9% of employees and severe anxiety was reported by 3% of them.

Researchers point out that the people who report increased levels of depression and anxiety experience stress more intensively, are less likely to ask others for help and have trouble sleeping. They are also less satisfied with their health, feel more discomfort during learning and teaching, do not feel they can rely on themselves and have feelings of loneliness.

The survey questions also focused on the prevalence of risky alcohol use among young people. According to the self-reported quantity and/or frequency of alcohol use 21.3% of students, mainly males, exhibit risky alcohol consumption with accompanying psychological and functional impacts.

It turned out that many students would prefer to resolve their mental issues alone. Money was one of the barriers reported to be preventing people from for seeking help and the fear of what others would think about them was also a significant factor.

In the pandemic, the students feel most inconvenienced by the lack of contact with their fellow students, an imbalance between school and private life and the demands of planning and organization of various activities. Staff as well as students report increased discomfort associated with teaching. Similarly, they miss contact with colleagues, report an imbalance between work and private life and the need to work outside normal working hours.

This research builds on previous projects. In 2020, at the beginning of the global pandemic, the researchers obtained responses from 235 students, out of a sample of 1,300 students who participated in the original 2018 survey. The survey took place during a period of escalating anti-epidemic measures. They found that the students' mental health was not deteriorating at that time and the levels of depression and anxiety were comparable to 2018. "It is important to distinguish between short-term and long-term effects of the pandemic on people's mental state, and to prepare for possible consequences which may emerge later," points out Ján Pečeňák, Head of the Psychiatric Clinic of the Faculty of Medicine of Comenius University and of the Bratislava University Hospital.

Comenius University leadership immediately supported the research. "This higher education research is unparalleled in Slovakia in terms of its scope and focus," said Radomír Masaryk, Vice-Rector for External Relations at the press conference. The university has been paying attention to the mental health of students since the beginning of the pandemic and has cooperated with experts to launch online counselling at the Psychological Counselling Office of Comenius University while also offering online spiritual counselling. "The university plans to open a new CU Information centre which will bring many of the services we already offer under one roof, including psychological counselling and counselling for students with special needs," concludes Radomír Masaryk. 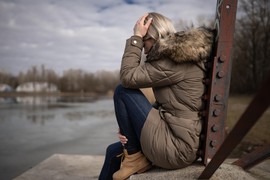