Bratislava, 18 July 2022: The Q-vent mini respiratory support device developed by Slovak scientists is currently helping in Kenya. The device arrived there as part of a humanitarian mission supported by SlovakAid - Slovak Agency for International Development Cooperation.

The Q-vent mini was developed at the beginning of the Coronavirus crisis in 2020 by the twin brothers Daniel and Samuel Furka from the Department of Physical and Theoretical Chemistry of the Faculty of Natural Sciences of Comenius University, as well as doctor Patrik Palacka from the National Cancer Institute. They responded to the increased need for lung ventilators and printed the device completely on a 3D printer. The total cost of its production was around €250, which is about 100 times less than the conventional fan costs. The first version of Q-vent was financed from the own resources of the Furka brothers, Patrick Palacka, and the medical student Dalibor Gálik. The necessary parts for the scientific team were produced free of charge by the Slovak companies Koval Systems and EMBASYS. The project also uses artificial intelligence for safety management, which was developed by Julio Ariel Dueñas Santana from the University of Matanzas in Cuba.

The project increases the visibility of Slovakia around the world at a time when there is an acute global shortage of ventilators, Reuters agency noted.

The later support of the State Secretary of the Ministry of Foreign Affairs of the Slovak Republic, Ingrid Brocková and the SlovakAid agency made it possible to create the current version of the Q-vent mini ventilator with more extensive use. In its present form, Q-vent is a small portable device designed for breath support during the treatment of various acute and chronic diseases, or during basic surgical procedures. It also finds use in post-traumatic care.

„It should be of benefit especially in countries where the health care is not the best developed. It is also usable in the field, where it is not possible to set the conditions of the classic hospital room,” Samuel remarked. This is why it has found use in Kenya. Moreover, countries such as the USA, Czech Republic, Portugal, Kenya, India, as well as Brazil and Australia have already shown interest in the Q-vent mini.

As this continues to be a non-commercial project, each country that requests the implementation of the team and ensures production capacity is eligible to apply for a license.

Thanks to Q-vent mini, more than ten jobs have been created in Slovakia and Kenya to date. On the international level, the device has brought together experts and students from medicine, natural sciences, technology, and various other disciplines. The project has also brought about the cooperation of Comenius University with the University of Nairobi. In June of this year, Daniel Furka, Samuel Furka, and Marián Janek presented the project in London, resulting in further cooperation with Queen Mary University of London. 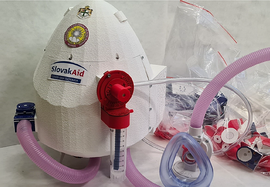