Awarded Students Include a Startup Founder, a Programmer, and an Olympic Athlete

In the context of the struggle for freedom and democracy, Comenius University Rector, Professor Karol Mičieta, told the recognized students and teachers that students were once again taking part in protests and public assemblies for a decent Slovakia after twenty-nine years. “This is why today is also the celebration of those who have not been discouraged by obstacles along their journey of discovering knowledge and who have achieved remarkable results in our environment. Young people and students are a dynamic and mobilizing force which awakens the national consciousness. I am convinced that your generation will carry on the legacy, appeals, and desires of your predecessors for a better society and better life.”

The thirty awardees who received an Academic Mention from the rector included Martin Pekarčík from the Faculty of Medicine, who was the winner of the Youth Embassy competition and the 2018 Slovak University Startup Cup, and who represented Slovakia at an international startup project in Copenhagen with an S-case project measuring the body’s physiological functions; Michal Mikuláš from the Faculty of Arts, who was awarded 1st Prize in Literary Translation by the Slovak Literary Translators’ Society; Jozef Kováč from the Faculty of Mathematics, Physics and Informatics, who is highly engaged in the pedagogical process and who participated in the preparation and teaching of a new subject called “SAS Programming” and selective exercises on probability and statistics; Lukáš Kuppé, a student at the Faculty of Management, who, as part of the Learning for a Better Life project, has been teaching children with cancer; Jakub Šimoňák from the Faculty of Physical Education and Sport, who was a participant at the 2018 Winter Olympics in PyeongChang; and Lucia Pacalajova of the Faculty of Natural Sciences, who is the main organizer of the Natural Sciences Drop of Blood campaign and a promoter of education in the natural sciences as a part of the “Experience University” Mini-Erasmus project.

The event included the awarding of thirty letters of appreciation to Comenius University teachers.

Dr Maroš Nicák, Vice-Dean of the Evangelical Lutheran Theological Faculty, expressed thanks on behalf of the awardees. “17 November has become an inseparable part of the collective memory of the Czech and Slovak peoples. However, the purpose of commemoration is primarily individual and social self-reflection. If we were to only have recollections about freedom and democracy, it would already be too late; freedom and democracy must be actively lived,” he said. 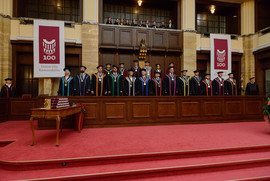 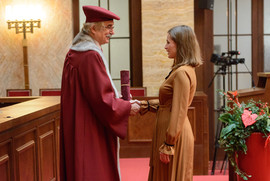 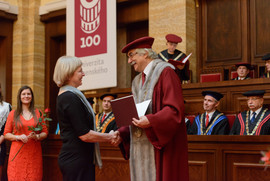 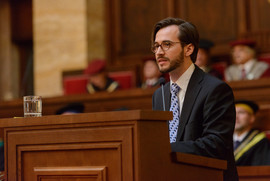