Bratislava, 9 February 2017: In the Early Bronze Age at least one thousand people lived in a fortified settlement at the location of Vráble-Fidvár; this represents an exceptionally large population for that period. Other such settlements known to date housed three hundred people at most. Archaeological research led by Professor Jozef Bátora from Comenius University revealed that in the central European context the site’s proto-urban architecture and buildings are at least three hundred years older than was previously thought.

The important archaeological site at Vráble-Fidvár, which is located on the left bank of the Žitava River, had already been settled in the later Stone Age (approx. 4000 to 3000 BCE). In the Early Bronze Age (approx. 2100 to 1450 BCE) the settlement was gradually encircled by three trenches. “In the fortified area we discovered more than 160 floorplans of dwellings which were arranged in a radial manner in a number of rows along the circular fortification. Using the C14 radiocarbon method, they were dated to the period 2100 to 1800 BCE, meaning that these are examples of proto-urban architecture and buildings which are three centuries older than was known to date from previous research. From this perspective, this is a revolutionary finding,” said Professor Jozef Bátora from the Department of Archaeology, Faculty of Arts, Comenius University.

The archaeologists examined houses in various parts of the settlement. The settlement’s central part housed the community’s elite, which was indicated by the use of stone in the house’s construction as well as wooden floors, whereas the dwellings of lower social strata were made from twigs, clay, and floors made of trampled earth. According to Bátora, this is clear evidence of a social differentiation being made between inhabitants and the first time that this has been registered to this degree in an Early Bronze Age settlement.

All of the examined dwellings could be dated to the Únětice culture. The houses had standardized dimensions: a length of ten to fifteen metres and a width of six to eight metres. One interesting feature of the settlement is that there was a lane between the houses which was about one metre wide. However, the hygienic habits of the population are very questionable. “The lane was full of kitchen waste, including broken containers, animal bones, and non-functioning working tools,” Bátora said. Domestic waste was not collected in one place but was simply discarded between houses, where it accumulated.

The settlement had a burial site which was located three hundred metres to the south. Most graves had been reopened; this usually took place seven to ten years after the burial of the deceased, when the soft parts of the body had decomposed. The graves contained ceramics (amphoras, bowls, and pots), various bronze ornaments (earrings and pins for use on clothing) and occasionally food “for the afterlife” (beef ribs).

“The archaeological research and its results significantly push the boundaries of knowledge about our distant past and are a perfect example of effective international cooperation between significant scientific institutions. Our students are provided with an attractive opportunity to gain unique practical experience. This contributes to new knowledge, which changes the historical map of our region and is a fulfilment of the goal of making our university more international at the highest possible level,” said Comenius University Rector, Professor Karol Mičieta. 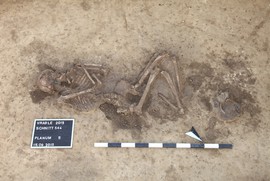 An Únětice culture grave where an older woman was buried; the archives of the Institute of Archaeology of the Slovak Academy of Sciences in Nitra and of the Department of Archaeology, Faculty of Arts, Comenius University; photo: J. Kalmbach 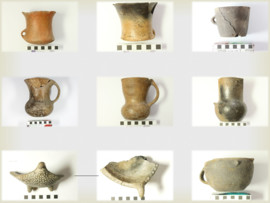 A sample of ceramic production from the Early Bronze Age; the archives of the Institute of Archaeology of the Slovak Academy of Sciences in Nitra and of the Department of Archaeology, Faculty of Arts, Comenius University; photo: J. Bátora 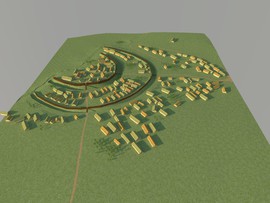 A model (reconstruction) of the fortified settlement in Vráble-Fidvár in the period of the Únětice culture (2100 to 1800 BCE); source: O. z. Žitavská komunita Vráble