The largest ever investment in science and research in Slovakia: The Slovak University of technology and Comenius University receive 111 million euros

Bratislava, 15 October 2019: The two largest and best-performing universities in Slovakia have received the largest ever investment in modernizing research infrastructure, renovating buildings, and strengthening scientific capacity. The coordinating leader of this project is the Slovak University of Technology, whereas resources will be split by the two universities evenly.

The project proposal was arranged by the universities in cooperation with the Slovak ministries of education and finance, experts from the European Investment Bank and the European Commission. This process of many years of project preparation was completed with a joint signing of an agreement by the Minister of Education, Science, Research and Sport, Martina Lubyová, alongside Slovak University of Technology rector Miroslav Fikar and Comenius University rector Marek Števček.

Upon signing the agreement, Martina Lubyová stated: “This effort was worth it. The Accord Project has the potential to significantly influence the socioeconomic development of Slovakia through modernization and developing higher education in the area of STEM (Science, Technology, Engineering, and Mathematics) at the two most exceptional and important universities in Slovakia.”

A NEW ERA BECKONS AT THE UNIVERSITIES

Slovak University of Technology rector Miroslav Fikar thanked everyone who was a part of the proposal’s success and gave a special thanks to the previous leadership at the Slovak University of Technology (Robert Redhammer) and Comenius University (Karol Mičieta) for their personal involvement, inventiveness, and patience during the project’s preparation. “I would also like to thank the vice-governor of the European Investment Bank, Vazil Hudák, for his irreplaceable help and personal involvement.”

According to Fikar, this project “starts a new era in the lives of both universities. This will be a time of closer and better cooperation and a time of great investment in research infrastructure, which will see both universities emerge stronger, more modern, and more attractive.”

Comenius University rector Marek Števček emphasized the fact that “for our researchers, as well as students and doctoral students, this project will have a great positive impact, because it will improve the conditions for their creativity and bring more opportunities to participate in top-level research projects.”

This event was supported from afar by the vice-president of the European Investment Bank, Vazil Hudák, who in his address said: “The technical help of JASPERS, provided by both the European Investment Bank and the European Commission, was instrumental in the preparation of the Accord Project for accessing funds from European grants. Accord will allow for two key Slovak universities (the Slovak University of Technology and Comenius University) to join forces and do well in international competition, particularly from the Vienna-Brno-Bratislava regional hub. This endeavour is very significant for Slovakia as it will lead to the modernization of higher education and research, the greater attractiveness of study programmes, and a motivation for international students and researchers to consider Slovakia as a place to come to.”

AIMS OF THE PROJECT

The aims of the Accord Project are to improve university capacities and competences in research, development, and innovations, and increase the two largest and best Slovak universities’ competitiveness in the European Research Area. Both universities shall modernize their research and IT infrastructure, renovate buildings, and thus increase their level of quality and attractiveness as an educational environment, while also working on significantly decreasing their use of energy and CO2 production.

The project will see a new pavilion of top-level technology and new equipment and machinery become available in several open laboratories for researchers at both universities as well as other research organizations and partners in the private sector.

The project will support excellent teams and centres, and it will include support for a whole spectrum of research activity, including in the area of cyber security, automation and operations, biotechnology, biomedicine, and materials research.

This is the largest ever project of academic investment in Slovakia, and it represents the most significant investment in the current programme period of the implementation of structural funds in the Research and Innovation Programme. In the next four years both universities will spend 111 million euros on investment. Of this, 105.4 million euros is from EU funding and state funding, with another 5.5 million euros being invested into the project from the universities’ own resources.

The project’s original 120-million-euro package was trimmed after a request from Brussels that a key component for paying researchers be dropped. “This sum of more than eight million euros will need to be found somewhere jointly and with the help of the Slovak government, so that we can fulfil the measurable indicators of the project in terms of scientific performance. I trust that this problem will be able to be solved,” said Miroslav Fikar. In response Minister Martina Lubyová stated that “these resources will be directed in further initiatives within the Research and Innovation Operational Programme.” 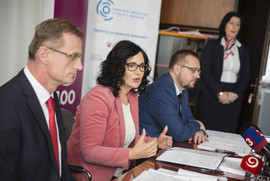