Researcher Amy Pinkham: Paranoia is more common than you thought

Dr. Amy Pinkham works at the School of Behavioral and Brain Sciences of University of Texas in Dallas, USA. In her most recent work she focused on paranoia – an unfounded belief that someone wants to harm us. Her findings have supported the hypothesis that increased activation of the brain part called amygdala may serve as a mechanism for paranoid ideation. As a part of their ongoing collaboration with Dr. Michal Hajdúk from the Faculty of Arts and Faculty of Medicine of Comenius University she was invited to give a lecture "Paranoia in Psychosis and Beyond" for psychology students at the Faculty of Arts.

Don’t be paranoid! We say that sometimes without thinking much about it if a friend expresses fears or worries. In your lecture you mentioned that “paranoia is evolution gone extra.” What actually is paranoia?

Paranoia refers to beliefs that someone, some organization, force, or power, is trying to harm you. It can take many forms that vary according to how much threat is involved. For example, someone could think that most people are not trustworthy and are only looking out for themselves, or someone could think that his or her friend is talking about them behind their back. These are fairly low threat levels. Alternately, someone could think that the government is spying on him or her 24 hours per day or that someone is trying to kill them. These are much more serious threats and often cause much more distress for the person who has them. What is essential for these types of thoughts to qualify as paranoia however is that they need to be unfounded. So, if someone is talking about you behind your back or is trying to kill you, those thoughts would not be considered paranoia. Instead, it would be advantageous to have these thoughts so that you can respond appropriately.

How many people in the population are affected by paranoid thoughts? Are they present only in people with mental illness?

Paranoid thoughts are very, very common, and they are definitely not limited to people with mental illnesses. Broad surveys of people in the general population indicate that between 15 and 20 % of people regularly experience paranoid thoughts. While we do see higher incidences of paranoia in various mental illnesses like schizophrenia, bipolar disorder, and post-traumatic stress disorder, paranoia is now widely acknowledged as existing on a continuum that spans healthy populations all the way to severe mental illness.

A large body of research demonstrates quite convincingly that paranoia has a negative effect on daily life. Within clinical populations, greater paranoia is linked to poorer social relationships, less acceptable social behavior, and greater likelihoods of being alone. It is also associated with greater sadness and nervousness and less happiness. In healthy individuals, the effects are largely the same. Greater paranoia is linked to reduced social engagement and poorer social communication as well as less relationship satisfaction. Perhaps most importantly, we also see a link between paranoia and increased suicidality, which really underscores the broad and strong impact of paranoia on day-to-day life.

In your recent research, you have tested a new method to treat paranoid thoughts. Could you describe it?

One option for reducing paranoia may be to target the brain mechanisms that we believe are responsible for paranoid thinking. Our work has demonstrated that over activation of a brain region called the amygdala seems to be critically important for paranoia. The amygdala is responsible for detecting threats in the environment, and for most people, threat signals from the amygdala are evaluated and regulated by the frontal cortex. So, even if the amygdala tells us there is a threat, the rest of our brain can tell us to ignore that signal if we know that the threat does not actually exist. But, for individuals who are paranoid, these regions of the frontal cortex may not work well enough to effectively control the amygdala and to dismiss these threat signals. So, one option is to try to improve the effectiveness of these frontal regions via neurostimulation.

Can we hope that this way of treating paranoia will bring positive results?

In a small pilot study, we stimulated the frontal cortex of paranoid individuals using low level electrical current, and we found that after active stimulation (as compared to a sham, or placebo, condition), individuals reported less paranoia. We need to do much more work in this area, but these fi ndings suggest that stimulating frontal regions via transcranial direct current stimulation (tDCS) may be an effective treatment for paranoia.

During your lectures you mentioned that belief in some conspiracy theories could be viewed as paranoia. Is there – in your view – any way we could “help” those people who believe in them? How to minimize their presence in society? 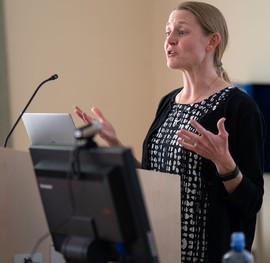 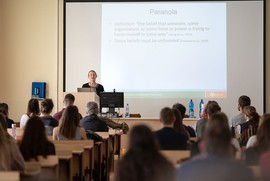