Matt Apuzzo, three-time Pulitzer Prize winner and New York Times reporter, visited Comenius University, where he lectured on Real Threats to Real News. In an interview for Naša Univerzita he talked about his college experiences, the challenges of modern journalism and the European Union.

Mr. Apuzzo, you have won the Pulitzer prize not once, not twice, but three times. However, some people may not know that you started as a student of biology.

I did. I was a Pre-Med student, and I thought I would be a doctor one day.

By the end of your studies, you were the editor of your college newspaper. Would you say that you have found your true calling in journalism, even though you majored in something else?

I for sure did. I’ve also realized that I was not nearly as good a scientist as I hoped I’d be. I took organic chemistry and did very, very poorly. Just barely passed. That was the final sign that maybe medical school was not for me. I had been working for the school paper and it always seemed like fun to me. It never felt like work. I had an internship at the local paper in my university town and that never felt like work either. It just sort of occurred to me – maybe if I could find a way to do that, then all the better.

Basically, your hobby has become your job. And then it brought you a few Pulitzer Prizes.

It’s funny. When you’re starting off, you think of the Pulitzer Prize as the award for the most valuable player. But once you’ve been in this job for a while, you realize it’s more like winning the Champions League. No matter whose name is on it, it’s all about teamwork. The times I’ve won, it was always thanks to a group of people. It's hard work. A reporter needs colleagues who work as hard as he does. I was very lucky.

What advice would you give to students who are thinking about switching their major or taking a different career path? Because, obviously, such a change has worked out for you.

That’s a great question. In the United States people change their major all the time. I don’t know how it works in Slovakia, but I know that in European schools you tend to apply for a program and that’s the program you’re in. You can’t just say: “Oh, I don’t want to do Economics anymore, I want to try Literature”. But in the United States it’s very common, because who knows, as a 17-year-old, where they want to be for the rest of their life? To this extent our students have more ability to learn something new that pushes them out of their comfort zone. It only increases the chance they’re going to find something they are truly passionate about. I would say, if you discover that you’re not passionate about the thing you’re doing right now – you want to be passionate about something else, or you already are passionate about something else – follow that. University is short, life is long and if you’re not excited about the road you’re on, it’s probably not worth it.

What would you recommend to future journalists? Is there one specific skill or strategy on how to write Pulitzer-winning material?

Read a lot. Read journalists that you admire and see how they structure their stories. See how they build their story from the ground up and really study that. Try to put those lessons into your own writing. If you have people in this world whose work you admire, reach out to them. Don’t be afraid to ask for advice, don’t be afraid to ask for help. Be curious and read a lot.

So, is it necessary to find a tutor or mentor who will guide, teach, and help us?

You also taught at Georgetown University in Washington.

Yes, and I’m still affiliated with Georgetown University. I haven’t taught in a few years because I’ve been abroad, but I love it! It was amazing to be in class again when we had a workshop at the Department of Journalism here in Bratislava.

You are currently working in Brussels as an investigative correspondent for The New York Times. How does it feel compared to your previous experiences in Washington, which you covered for more than ten years?

It’s different. I was really feeling like I needed to grow. It doesn’t matter where you are in your career, you need to constantly be growing and learning new things. So, I’m learning a lot, which is really important to me. The obstacles are different in my current job – obstacles of language, obstacles of understanding the politics of all the European countries. Wherever I might go, there are new challenges, but they are all very exciting challenges.

What have you learned about Europe? What makes Europe different from the rest of the world or at least from the United States?

I will say one thing that I think is interesting. In Europe, I find that in general, people are much more suspicious of companies, big industries, and much more trusting of their governments.

Right. In the United States it’s the opposite. Nobody trusts their government, and everybody trust these companies. And here’s a good example. I will say, I don’t want to have a national ID card, or I don’t want the government to have my health information, or I don’t want to do anything that could allow anybody to track me. But I’m going to walk around with my cell phone in my pocket all the time and give my information to Apple or Google. I get mad if the government wants to ask me a question I don’t want to answer, but I just hit “accept” every time something comes up on the internet, like privacy settings or cookies. I think in Europe people are much more skeptical of the big companies having their data, but much more comfortable with the government. Because they say: “We can vote out our government, we can change it, we have a say. We have no say in these companies though. Industries are not accountable to us at all.” In the United States, because of the mythology around the “American dream”, we have a high degree of skepticism around the government, less around the companies. And that’s going to change for me.

It’s interesting that you consider Europeans to be more trusting of governments, because many European countries are very vocal about the so-called dictates from Brussels. Maybe Europeans do trust their governments more, but at the same time there is a strong movement against the European Union. Have you encountered anything like this?

When you come to a problem in Europe today, is the answer more European Union or less European Union? It is not really your government, it doesn’t function as a government, but it still does some things as a government. That leaves some weird things uncovered. Is the answer: let’s make it more of the government, so it can complete the mission many people have for it? Or let’s just keep European Union out of it? I think that’s what people really mean when they debate about European Union. It’s an unfinished experiment. Even in countries like Hungary, when you hear Viktor Orbán talk about the EU – he doesn’t actually want to get rid of European Union’s money. He just doesn’t want to feel like he has to answer for anything. I understand that there’s tension between ideal sovereignty and European Union, but if you told all the university students: “Okay, no more Erasmus,”...

Yes, we would riot.

That’s exactly my point. If you had to check your passports at the border every time you wanted to travel, I think people would not be very happy about that. There’s a natural tension going on, but this is ultimately a part of the democratic process.

That’s true. We are still in the middle of the debate; I mean the fact that not all arguments against the EU are completely pointless.

Well, when you see people lying, that’s invalid. When you have Viktor Orbán tell people that Brussels is going to take away their money and demand that they take a bunch of migrants to their villages – that’s just scare tactics. That’s not part of the democratic discussion. I think it’s totally understandable that countries would talk about sovereignty and what are the competencies of the EU and what are the competencies of the national governments. That makes total sense.

Both your journalistic work and your book, Enemies Within, are described as "courageous, filled with data, greatly sourced". How do you think the sources and facts in the press change the readers’ perspective on populism or populist politicians?

I think people understand that facts matter. The challenge of the media right now is how you make a sustainable business model around the fact that gathering news is expensive, complicated, and hard. Producing propaganda and lies is easy. If the facts cost money and the lies are free, and you can just blast them out to everybody – how do the facts break through? That’s one of the fundamental challenges we have in the 21st century.

What would be your answer to this question?

I don’t have any!

I think we’re all trying to figure that out. I wish I had a more obvious answer.

Are you currently working on something you could tell us more about?

So, we just have to wait for the next Pulitzer Prizes to be announced.

(laughter) Hopefully, we will put something in the newspaper.

The Tatrabanka Foundation, in cooperation with the Petit Academy and Comenius University in Bratislava, organized a lecture by the American journalist as part of the Pulitzer Prize Lecture Series program. 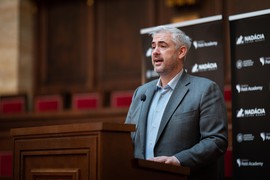