Bratislava, 31 May 2019: Transparency in public procurement and the filling of important positions is one of the priorities of Comenius University. This was the message presented at a press conference held by the university's rector, Marek Števček. The new executive's important plans include updating the electronic system for students so that it is more modern and user-friendly. This year Comenius University is celebrating its centenary, with dedicated events culminating on 27 June.

To date Comenius University has issued more than a quarter of a million diplomas, and its graduates can be found in all spheres of social life, be that in professions throughout Slovakia or around the world. The university is an important research institution; up to a quarter of the academic papers of Slovak universities found in the Web of Science database are published by Comenius University experts. In terms of the highest ranked publications, one third of the Slovak total in higher education is produced at Comenius University.

“One of the university's strategic priorities is to change the electronic system for students so that it is more modern and user-friendly, while also integrating multiple aspects of university life,” said the rector, who added that he plans to introduce e-applications and look into e-diplomas.

The new executive wants to work on the quality of lectures. One of the first tasks of the Quality Council will be to improve student assessment systems. Rector Števček has also introduced a proposal to introduce compulsory teacher training for new lecturers so that they are better prepared for the task of teaching students in the lecture halls.

Thanks to a partnership with the Foundation for Stopping Corruption Foundation, the university wants to streamline and improve the quality of the public procurement process and the filling of important positions. “The foundation will advise us on major projects, such as the planned renovation of dormitories at a cost of 14 million euros. We want to do it faster and cheaper, so I have delayed the project by one year so that we are better prepared,” said the rector, adding that the university wants to be open and transparent.

By signing an agreement on cooperation, Comenius University entered into close partnership with the city of Bratislava. Together with other Bratislava universities, Comenius University wants to promote the idea of studying in Bratislava to students abroad. Currently, the university is working with the Slovak University of Technology on building a new contact centre on Štúrová Street. Students, academics, and the general public will be able to visit a community space in the city centre where discussions, lectures, and concerts of up and coming bands will take place. Bratislava should thus be a more attractive city for students.

According to Jana Duračinská, who is the vice-rector for property management and investment, the university wants to present itself as a as a modern institution with an emphasis on acting responsibly in relation to the environment. “Our goal is to gradually reduce visual smog on university property which is currently rented out for advertising purposes, namely billboards,” Duračinská said, adding that recycling waste at the university's buildings must be an obvious choice. Alongside the city of Bratislava, the university wants to work on resolving issues concerning  infrastructure, security, lighting, and the  modification of community spaces in the vicinity of the dormitories in Mlynská dolina.

The past one hundred years of the university's existence can be explored at an exhibition at the Bratislava City Museum from 26 June. On the following day, a commemorative coin and postage stamp celebrating the anniversary of the university's founding will be presented to the public. At a ceremonial gathering of the academic community on 27 June, prominent university personalities and collaborating institutions will be recognized. The rector will award the Comenius University Gold Medal to the President of the Constitutional Court of the Czech Republic, Pavel Rychetský, for his contribution towards the development of democracy, legal science, and the rule of law. “The celebrations will culminate with a celebratory concert in the Slovak Philharmonic, which will feature a symphonic fantasy composed especially for the centenary of the university,” said Radomír Masaryk, the vice-rector for external relations. 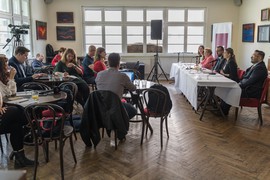