Jozef Komorník, the Former Dean of the Faculty of Management at Comenius University, Passes Away

In 1991 he was a co-founder of the university's Faculty of Management, which was the very first in Slovakia to specialize in teaching and undertaking research in the field of management. He became the head of the Department of Economics and Finance at the faculty in 1993. In 2008 he established the study programme of international management, which he was the guarantor of at Master's level.

A service for Professor Jozef Komorník will be held on Wednesday, 3 July 2019, at 11.00 am in the Church of St Margaret in Lamač in Bratislava. The funeral itself will take place at 12 pm in the Lamač cemetery. 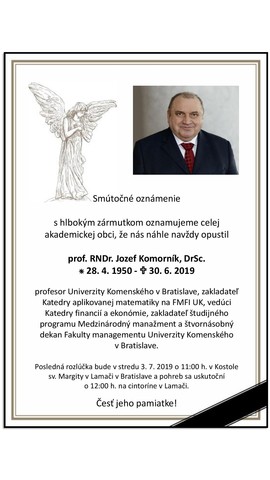