Bratislava, 23 October 2019: A major problem in the Slovak education system is the mass departure of clever students to universities abroad, most often to the Czech Republic. Comenius University hopes to stop this trend and will focus more actively on appealing to high school students.

Czech universities relatively near to Slovakia have attracted Slovak students for many years, offering modern dormitories and top-level facilities as high school students in the eastern part of the Czech Republic have been leaving in large numbers for regions further west, particularly Prague. Slovak students in the Czech Republic enjoy a reputation of being active and clever when compared to their Czech counterparts.

“We do not agree with the idea that Czech universities are necessarily better. Comenius University has study programmes which are just as good, and in some cases our programmes are better than what they offer and vice versa. However, Czech universities have been investing more into marketing for a long time,” said Comenius University vice-rector for external relations Radomír Masaryk. For the first time, Comenius University will participate at the education trade fair in Brno as a whole organization. “This is not so much about approaching Czech students to get them to come and study at our university. That is more of a mid-term plan. Currently we would like to motivate Slovak students thinking of studying in the Czech Republic to consider studying in Slovakia instead,” Masaryk explained. Comenius University will be advertising itself to potential students alongside the Slovak University of Technology, which is another top-level institution based in Bratislava.

Another useful strategy is the headhunting of high school students at national and international competitions. It is through the targeted approaching of winners of specialized competitions that Comenius Unviersity will try to motivate more successful students to study here. Some faculties will accept them for studies without the need for entrance exam and may even offer them a one-time scholarship in their first semester.

While still at high school, Erik Mokroš received the Dean’s Prize from Comenius University’s Faculty of Natural Sciences for his high-school research project, which focused on working out the effects of collodial silver when compared with commonly used antibacterial remedies. “We discovered that there was a considerable amount of toxicity when this solution broke down red blood cells and prevented the formation of enzymes. But when used, for example, on acne-prone skin it had excellent antibacterial effects,” said Mokroš, who is now a first-year student of biology at Comenius University. He presented his project at the Amavet Festival of Science and Technology, and, thanks to this project, he also received a Duke of Edinbugh Silver Award.

After being actively approached by the dean of the Faculty of Mathematics, Physics, and Informatics, physics student Natália Tóthová also chose Comenius University. She was the winner of the Slovak round of a mathematics, physics, and chemistry olympiad. Martin Barka chose Comenius Unviersity for its well-renowned experts and prestigious reputation. His study, entitled “Observations of Bird Life in Lednica”, won the regional round of a biology olympiad, and he came fifth in the nationwide competition. “I recommend that those interested in studying here attend the Open Day; meeting the students and teachers helped me a lot when I was making my decision,” said Barka, who is a student of systematic biology.

For the first time, Comenius University is organizing a university-wide Open Day for high-school students on 5 November 2019. Thanks to cooperation with the Bratislava Self-Governing Region, high school students will have that day off school. For those who have yet to decide where they will continue their studies, all of the university’s faculties will provide them with information in the main university building on Šafárik Square. Those who already know what study progamme they would like to enrol in will be able to go straight to the relevant faculty.

“A quality university is not formed just by good teachers and researchers, but also by quality students. They are the driving force which pushes our university forward. I am convinced that increasing the number of quality students will be reflected over time in even better study programmes at our university,” said Comenius University rector Marek Števček. 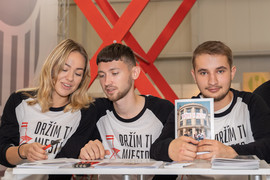