Bratislava, 31 March 2020: At the Comenius University Science Park, researchers are working on revealing the complete genetic information of the new coronavirus in Slovakia. Such an analysis of genomes and their comparison can tell us a lot about the origin of the virus's isolates, i.e., where they most likely came from. So far they have analysed the isolates from the first Slovak patients and the genomes are now part of the GISAID international database.

At a specialized centre at the Institute of Virology of the Slovak Academy of Sciences, researchers have successfully isolated SARS-CoV-2 nucleic acid samples from the first patients in Slovakia. The new coronavirus is composed of RNA, a sheath consisting of proteins, and a lipid sheath very similar to human cell membranes. The microbiology laboratory has taken non-infectious and purified samples of nucleic acid for further research of DNA (not RNA). When dissolved in water, these samples are harmless and can be further analysed by scientists.

“We would like to sequence many more isolates from different outbreak locations and thus map the whole of Slovakia,” says Tomáš Szemes from the Faculty of Natural Sciences at Comenius University, who has been working with his team at the Science Park. In cooperation with colleagues from Italy, France, and Germany, they would like to focus on finding the relationship between the differences in the genomes of the virus and the differences in the attachment sites of the virus, which vary among different population groups. This research has the potential for the development of treatment. “Knowledge of genomes can help us better control the spread of the virus and track it,” explains Szemes, who works at the Department of Molecular Biology.

At a time when Slovakia is experiencing a lack of personnel and equipment, dozens of experts from the Faculty of Natural Sciences are lending a helping hand. "We have the expertise of biochemists, geneticists, molecular biologists, and virologists with extensive experience in the testing method," said the faculty's dean, Peter Fedor.

“We can provide experts who are able to do testing using molecular biological methods,” explains Katarína Mikušová, head of the Department of Biochemistry at the faculty. Geneticists at the faculty are also ready to test patients' samples. “It is extremely important that the analyses are made using a validated protocol and that the results are unambiguous,” says Ľubomír Tomáška, head of the Department of Genetics at the faculty. He is convinced that every healthy member of the department is willing to participate in the testing.

The Comenius University Science Park was established in 2015, when its building was made operational. It is a specialized research and development centre with a primary focus on biomedicine, environmental medicine, and biotechnology. In addition to having its own staff, the Science Park's infrastructure is also used by researchers from various faculties of Comenius University. The Science Park is getting closer to its primary goal and becoming a top scientific centre, which, in the spirit of the university's strategy, is to also be a centre of research for top doctoral students. 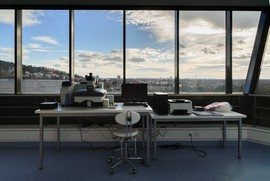 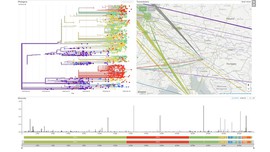 This graph depicts the phylogenetic tree of isolates from around the world along with a time dimension: the blue colour shows mainly Asian countries, the red colour shows countries like USA, Canada, and Mexico, and the green colour primarily shows European countries. On the map you can see Slovakia and the lines that lead to the probable source of our isolates. Below is a map of the genome, where you can see where there is variability between the isolates. Source: www.gisaid.org