COMENIUS UNIVERSITY HAS BECOME PART OF A EUROPEAN SUPER-UNIVERSITY

Thanks to the ENLIGHT alliance, students will have the opportunity to study at several universities at the same time. Doctoral students and researchers will be able to engage more flexibly in various collaborations across universities. The three-year project period will be used by Comenius University to prepare a new concept of internationalization for the university in the field of teaching. Joint courses and study programmes will be created where students and teachers from the participating universities will participate either in person or virtually. The ambition of the project is to better prepare students for the future.

Comenius University plans to involve 50% of its students in ENLIGHT's activities through short and long study stays and various forms of virtual mobility. Unlike the Erasmus+ programme, which consists mainly of individual mobilities, the ENLIGHT alliance offers opportunities for the gradual coming together of universities in planning joint courses, summer schools, and study programmes. "I am proud that our university has become part of this pan-European network. I believe that studying at Comenius University will be even closer to the standards of the best European universities," said Marek Števček, the Rector of Comenius University.

The alliance also includes non-academic institutions such as the City of Bratislava and Eset (a major IT company). As a result, the alliance will influence the creation of practice-oriented study programmes and current societal challenges such as climate change, the role of artificial intelligence in society, and social and cultural diversity. To a much greater extent, the global involvement and influence of universities in solving the major problems of civilization will increase. In addition to Comenius University, the Technical University of Košice and the Slovak University of Agriculture in Nitra are also connected with European universities in similar networks.

ENLIGHT stands for European university Network to promote equitable quality of Life, sustainability and Global engagement through Higher education Transformation. Students from the universities involved also worked closely together in the preparation of the project, as they are its end users. The student network will continue to play a key role in planning activities. 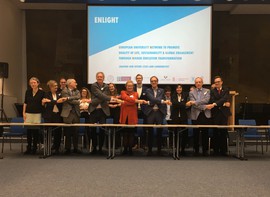 The representatives of the nine ENLIGHT universities 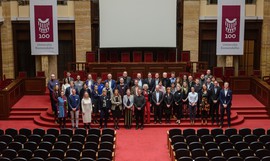