Comenius University will not organize graduation ceremonies in summer

Bratislava, 29 June 2020: Concerning the present epidemiological situation the rector of Comenius University in Bratislava Marek Števček decided today about complete cancellation of graduation ceremonies in the academic year 2019/2020. The decision is applicable for the whole university and is provisionally valid until the end of August 2020.

Since the very beginning of pandemics, Comenius University (CU) adopted many preventive measures, which according to Slovak and foreign professionals contributed to successful managing the epidemiological situation in Slovakia. On Sunday 8 March, the rector of CU suspended the full-time teaching and during following weeks closed students’ hostels — among them also the biggest accommodation complex, the University town of Ľ. Štúra — Mlyny.

‘Not ale measures were popular at the time of their implementation. Not all of them were adopted easily. However, I am doing them as I consider them reasonable, rational, and sometimes inevitable. I am glad we, to a large degree, contributed to managing the first wave of pandemics. However, we cannot lower our guard’, says the rector Števček.

Due to the transition from full-time to distant teaching, the examination period has been prolonged until the end of August at several CU faculties. The primary aim was to let the students in their final study year complete their study in the current academic year, which CU also achieved. Some students have already successfully passed the state examinations, the first online state examinations were held at Faculty of Medicine, CU in Bratislava in April. Until today they were held at other faculties online or under strict hygienic measures by attendance.

Many students desire to complete the university study with a graduation ceremony. The academic ceremony, in which not just students but also their families or friends take part in the time when the values of the seven-day moving median are growing is a significant risk. I am proud that people from all corner of the world study at our university, we have many international students. However, nowadays, mass events, which graduation ceremony surely is, represent a considerable risk. In quite a small space and for a long time the people from the whole country meet, including children or seniors. Despite an enormous respect for academic rituals, the determination to protect the health of students, their relatives and colleagues outweighed.

The recent school leavers will get their diplomas after all completed control processes; the faculties will provide them detailed information. In the case of favourable development of the epidemiological situation, CU plans to organize graduation ceremonies in autumn of this year. 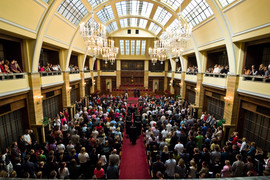