Bratislava, 17 August 2020: In this year’s prestigious Shanghai Ranking of the best universities in the world, the only Slovak university to be ranked was Comenius University in Bratislava (CU). This is the best ranking of the university since 2017. The CU shared the 601st – 700th place.

This year’s Shanghai Ranking evaluated more than 2 thousand universities, the published list contains the best 1 000. Comenius University (CU) was ranked, as the only Slovak university, on the shared 601st -700th place. The best university in the world is, according to the Shanghai Ranking, Harvard University. 7 universities from the Czech Republic were ranked, Charles University being ranked the best Czech university. In 2018, Slovak University of Technology also got onto the list on the shared 801st - 900th place. This is the best ranking of the CU since 2017, the university improved its position by 2 grades, which equals approximately 100 – 200 places.

“Academic rankings are only an indicative attribute of the quality of a university. Ranking is always dependent on specific criteria, so we take these rankings with a pinch of salt. Despite of this, I am proud that Comenius University confirmed its position again and, as the only Slovak university, was ranked among the best 700 universities. There are tens of thousands of universities in the world, so we estimate, that we are in the top 2%,” Marek Števček, Rector of the CU, said. “Our goal is to constantly improve the quality of education and science. From the point of view of education we made a large progress in the last year, especially in improvement of online learning which helps us with dealing with the pandemic. In the field of science we are implementing Incubator of Ideas project in cooperation with the commerce sector of the Science Park of the CU, we are planning to launch a project addressing first-class postdoctoral students, we are successful in receiving prestigious European grants from Horizon 2020, where the CU participated in 22 projects so far,” Rector Marek Števček said.

(Academic Ranking of World Universities, ARWU) also known as the Shanghai Ranking focuses mostly on scientific and research standards of the university. Six indicators are used to rank world universities: 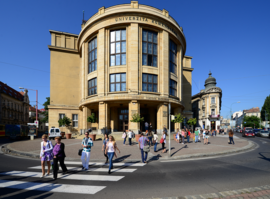