The three strongest institutions will work together in science

The two strongest universities and the academy of sciences will create a scientific cluster to improve the delivery of higher education and contribute towards the development of science, education, and culture in society. In particular, the mission of the scientific cluster will be to raise the national and international profile of the institutions and attract extraordinarily high-quality students, scientists, professionals, and investments. They will coordinate their activities to produce world-class scientific output and promote the social, economic, cultural, and environmental well-being and prosperity of the country.

“The signing of this memorandum is the outcome of months of efforts by our three strongest institutions, and the purpose of it is to make us partners rather than competitors. We want the sciences in Slovakia to be more competitive than they have been thus far, and this memorandum will serve to bring the three strongest scientific institutions in the country together so that they can help each other,” said Comenius University rector, Marek Števček. He also pointed out that these new partners will jointly deliver statements concerning important social issues so that their message is stronger, clearer, and more noticeable.

The rector of the Slovak University of Technology, Miroslav Fikar, said: “We need to build a strong research infrastructure, which is why we are signing a memorandum on cooperation today. We want to send a strong signal to our own organizations as well as to the world that as the three most powerful scientific research institutions in Slovakia, we want to work together in the international arena.”

According to Pavol Šajgalík, the President of the Slovak Academy of Sciences, this heralds a new level of cooperation between universities and the Slovak Academy of Sciences. “This cooperation is also of great importance because Slovakia is struggling and is facing the problem of the outflow of students who choose to study abroad, even as close by as Brno, which is 'stealing' scientists from us. I firmly believe that this memorandum will form a barrier to these two processes. It is also very sensible for the top scientific institutions to have a common structure and for people that want to participate in ongoing research to move smoothly between institutions.”

Most scientific activity in Slovakia is undertaken by academic staff at the Slovak Academy of Sciences, Comenius University, and the Slovak University of Technology. They produce more than 55% of all publications in the Web of Science database from all institutions in Slovakia. In the case of publications in the Current Contents Connect database, they produce up to 70% of the total Slovak output. 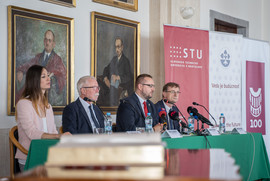