THE CLUSTER’S PRIORITIES ARE INTERNATIONALIZING SCIENCE AND SUPPORTING SLOVAK SCIENTISTS

Bratislava, 24 June 2020: The three most important Slovak scientific institutions today took stock of the partnership they had started a year ago with the signing of a memorandum of cooperation in the fields of education, science, and development. Comenius University in Bratislava, the Slovak University of Technology in Bratislava, and the Slovak Academy of Sciences are the most important scientific institutions in Slovakia. With their research potential, they generate most of the scientific production in the country. Today the first ever meeting of the executive bodies of the two universities and the presidium of the Slovak Academy of Sciences took place at Comenius University.

One of the priorities of the scientific cluster, which is also part of the memorandum, is the internationalization of research. In this area, the three institutions are cooperating on multiple projects. The SASPRO 2 project, initiated by the Slovak Academy of Sciences, which invited Comenius University and the Slovak University of Technology to join it in the second call, allows for the improved mobility of international researchers at Slovak centres. The Slovak Academy of Sciences can accept up to twenty researchers, and both universities can accept ten each. Altogether, this will create conditions for cooperation with forty researchers from abroad. “I perceive its uniqueness on two levels. One of them is supporting the return of Slovak scientists who have spent a long time abroad, and the other is the internationalization of the research space in Bratislava,” said Pavol Šajgalík, who is the President of the Slovak Academy of Sciences. Another project is aimed at modernizing the research infrastructure of Comenius University and the Slovak University of Technology. This is the Accord project, which represents the largest ever investment in infrastructure modernization and the strengthening of scientific capacity.

Perhaps the best public demonstration of the irreplaceable role of scientists and researchers was seen during the coronavirus pandemic. Indeed, it was the doctors and experts from these institutions who stood on the front line. They worked daily with samples from those who had been potentially infected, and they developed new tests and innovative protective devices. “At a time of closed borders and a lack of medical devices in Europe as well as around the world, we proved that we had the most important things right here at home. These were the top scientists and experts who, in a really short time and often under modest conditions, managed to develop world-class technologies and projects,” said the Rector of Comenius University, Marek Števček. Comenius University and the Slovak University of Technology were the first universities to halt full-time tuition, doing so on 8 March, and send students home, thus helping prevent the mass spread of the virus in its early days.

While public confidence in research institutions such as the Slovak Academy of Sciences and universities has been shown to have increased in a survey, the government has been shifting funding from European structural funds intended for science and research into other areas. “As research leaders, we currently perceive the stopping of European structural funds for science and research for the 2016 to 2020 period as a very serious problem. In particular, the reallocation of 170 million euros for other purposes, which violated the principle of partnership, will lead to research universities once again remaining with the notional ‘short end of the stick’ at the end of the programme period,” said the rector of the Slovak University of Technology, Miroslav Fikar. Last week, the representatives of scientific institutions met with the Minister of Education, Branislav Gröhling, to discuss the issue of tackling the lack of finances for science. The minister pledged to address this issue by Monday 29 June.

Comenius University and the Slovak University of Technology have decided on a common strategy for appealing to new students. Last year at the large post-secondary education fair in Brno in the Czech Republic, they manned a joint stand and presented Bratislava as a quality destination for tertiary study. Both universities plan to expand this cooperation further. Along with the City of Bratislava, they intend to have a joint stand at this year’s event. Both universities are also repeatedly organizing university-wide open days.

The scientific cluster also wants to respond to societal challenges in the future. A number of these relate to combating climate change and environmental issues. The Minister of the Environment invited the leadership of both universities and the Slovak Academy of Sciences to cooperate on creating independent analyses of the current state of affairs. Projects in this area where the institutions are both involved include a water management project in Slovakia. 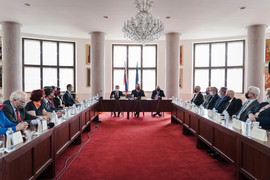 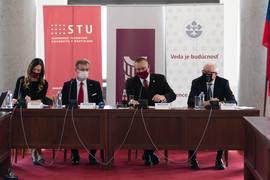