The international day of women and girls in science – 11 February

The General Assembly of the United Nations decided to support gender equality and strengthen the position of women and girls in science. It announced that 11 February would be the International Day of Women and Girls in Science. On this occasion, we decided to ask some female researchers from Comenius University about what motivated them to do science.

Knowing and discovering things is my passion, and being a scientist fulfils this desire. It is about observing and becoming involved in a process, experimenting, and being curious. I like to understand things and ask how things works and why. However, I often have more questions than answers. I was attracted by the interconnection of psychology and the natural sciences, which makes sense given that science has no boundaries. It has taught me humility towards everything that nature and many people have created. I am pleased to be part of the creative process, a team of inspiring people, and of new knowledge that also affects my everyday life.

When I was deciding what to do after finishing high school, studying at the Faculty of Natural Sciences at Comenius University was my second option. Well, nothing happens by accident! Even though I did not study medicine, I am now a researcher at the Faculty of Medicine. As a graduate student, I had the opportunity to taste the scientific atmosphere at the Institute of Molecular Biomedicine. There I met people with a wide range of knowledge, a high level of expertise, and an unquenchable curiosity, who had a great influence on my decision to become a scientist even then and who are still a motivating force for me today.

My scientific field is bioinformatics, which is an area between informatics and biology. Although I came to this field by chance, I enjoy it very much because it allows me to get to know two different disciplines which are developing rapidly. As a scientist, I can constantly observe new discoveries and contribute to them (at least to a small extent), work with clever students, and meet people from all over the world.

I became interested in science at primary school. I wanted to know about the unknown. This led me to go and study science, where I delved into anthropology and the study of fingerprints and palms. Did you know that fingerprints serve as individual identifiers but also reflect a variety of developmental disorders, chromosome aberrations, and congenital psychiatric diseases? This is a world of unexplored possibilities that captivated me and has made me a scientist.

I have always been interested in people: their thinking, behaviour, expressions, and "movement" in situations that are common and demanding. This is why psychology is where my scientific and practical activities are centred. Psychology is all around us, and it has an important place in sport, which is an area I care deeply about. However, I did not choose this profession. It gradually chose me, because in sport combining scientific knowledge with practical application is now a necessity.

ONLY 30 PERCENT OF WOMEN ARE IN SCIENCE

Women and girls make up half of the world's population and thus half of its potential. In addition to fundamental human rights, gender equality is also essential to achieving a peaceful society with full human potential and permanently sustainable development.

Currently, less than 30 percent of the world's scientific researchers are women. According to UNESCO data from 2014 to 2016, only about 30 percent of all female students choose to study in fields of science, technology, or mathematics.

The United Nations is responding to this societal phenomenon. It believes that science and gender equality are both vital to achieving internationally agreed developmental goals, including the 2030 Agenda for Sustainable Development. Over the past fifteen years, the international community has put great effort into inspiring and bring women and girls into science. Nevertheless, women and girls continue to be excluded from full participation.

At the same time, it is enough to realize that we were able to look at a black hole for the first time in 2019 thanks to Katie Bouman, a computer scientist who was involved in the development of an algorithm. The Italian neurologist Rita Levi-Montalcini was behind the discovery of nerve growth factor, and Marie Curie-Sklodowska can be thanked for her contribution to radioactivity and the discovery of the elements of polonium and radium, which made her the only woman to be awarded two Nobel prizes.

There are many things in science that we owe to women. However, there are still not as many as there could be if science, technology, and informatics were not burdened by gender stereotypes and long-standing prejudices. 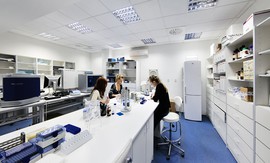