On 2 and 3 June 2016 a pre-presidency conference was held in the Rector’s Hall at Comenius University in Bratislava. As a part of its membership in the Trans-European Political Science Association (TEPSA), the Institute of European Studies and International Relations (IESIR), based at the Faculty of Social and Economic Sciences (FSES) at Comenius University, organized a conference which was attended by representatives of research institutions, professional organizations and academies from more than forty European countries.

Preparations for the conference got underway in the autumn of 2015. The conference programme reflected on the core priorities set by the Slovak government’s resolutions. Upon the basis of previous cooperation, the IESIR put together a programme containing five fundamental areas which Slovakia will focus on.

CU Rector Prof. Karol Mičieta opened the conference and emphasized the following in his speech: “In today’s cosmopolitan world, we are witnesses to dynamic changes. In addition to the migrant crisis and armed conflicts, we are faced with a lot of other problems which we must deal with.” As stated by the FSES dean, Assoc. Prof. Lucia Mokrá, experts discussed these matters and others in terms of their own research results and in an academic environment where they also welcomed some critical commentary. The expert discussion was also welcomed and presented by TEPSA Secretary General Prof. Jaap de Zwaan.

An opening address was given by Ivan Korčok, the State Secretary of the Ministry of Foreign and European Affairs of the Slovak Republic (MFEA SR). In his presentation, Korčok pointed out the steps and results of discussions which Slovakia had already implemented in connection with the presidency. He also defined and explained the formation and outlining of core priorities for the EU under Slovakia’s leadership. He said that it was important to consider each priority in real terms and reflect upon the short period the presidency offers for the accomplishment of real steps. He also highlighted the importance of cooperation within the trio and the particular priorities in the various crises which the EU has faced over the last decade. A presentation was also given by Assoc. Prof. Oľga Gyarfášová from the IESIR, who spoke about the development and current perception of the EU among the Slovak public and reflected upon the recent elections, the use of the EU in media discourse, and the presentations of political parties in the electoral campaign. Dušan Fischer of the Slovak Foreign Policy Association then pointed out the necessity of triangulation and evaluated security policy within the EU’s partnership with NATO and the United States as well as current security challenges.

The panel focusing on employment and the improvement of economic conditions in the EU saw presentations by Prof. Andras Inotai from the Hungarian Academy of Sciences, Miroslav Štefánik from the Slovak Academy of Sciences, and Miroslav Beblavý, who is a longstanding expert in the field and who has combined research results with political experience.

Friday’s programme saw experts talk about the current challenges faced by migration. Prof. de Zwaan spoke as an expert on European law, Antonis Papagiannidis spoke as a representative of the Greek research institute, and Živka Deleva spoke as the current director of a refugee centre in Berlin. The practical perspective which was presented raised questions and a very good and somewhat critical discussion on the difference between decisions and their actual implementation.

The panel on security issues and priorities was arranged by IESIR in cooperation with the Ministry of Defence of the Slovak Republic. Róbert Tibenský, the Director General of the ministry’s Defence Policy Department, gave a presentation on the interconnection of defence policy with presidency priorities as presented by the MFEA SR. Gianni Bonvicini, representing the Italian research institute, and Prof. Hanna Ojanen from the University of Tampere also spoke on the matter. As a part of strengthening a safe environment in the EU, the discussion returned to the theme of migration and the protection of external borders.

The closing panel focused on issues connected with the next steps which the EU will take under the Slovak presidency in the area of fiscal and monetary union. The panel was prepared in cooperation with the Ministry of Finance of the Slovak Republic. Michal Polák, an adviser to the Minister of Finance, presented expert observations and an assessment of the necessity of improvements in strengthening financial cooperation between EU member states. An expert assessment was also given by Prof. Iain Begg from the London School of Economics. The final piece in the complex mosaic of themes was presented by Adriana Lojschová from the Research Section of the National Bank of Slovakia.

In addition to the above discussed fields, the TEPSA recommendations, which were presented in the first part of proceedings by Funda Tekin, included a revision of relations between the EU and Russia, including a reflection on the situation in Ukraine; an analysis of relations between the EU and Turkey; a discussion on populism, which is becoming a decisive factor in the forming of public opinion; and the problematic consequences of election results in a number of member states.

Through the presentations of research by its experts at the IESIR at the FSES, as well as the specialized discussions, Comenius University made a contribution to evaluating the priorities of the upcoming presidency in the very first days of the official presentation of priorities by the Slovak government in Brussels and one month before the presidency itself begins. 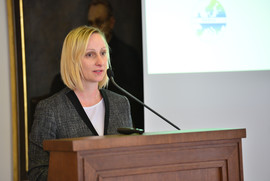 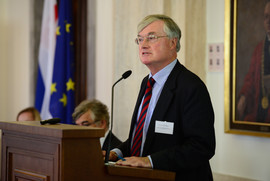 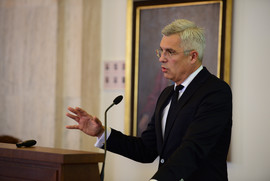