The 2016/2017 academic year was opened on 20 September 2016 at the Jessenius Faculty of Medicine in Martin in the Magna Aula auditorium with the participation of a number of special guests. The special ceremonial atmosphere of this meeting of students and staff was emphasized by the presence of Comenius University Rector, Professor Karol Mičieta.

As is traditional, the faculty’s dean, Professor Ján Danko, acknowledged the students’ outstanding results, extra-curricular activities, and their work in representing the faculty. He gave letters of thanks to faculty staff, including those teachers who had been ranked the most favourably in the student survey of teaching quality; he then praised the best supervisors and doctoral students, and awarded Jessenius Faculty of Medicine medals.

After that, Professor Mičieta greeted students and faculty staff. The Director of the University Hospital in Martin, Doctor Dušan Krkoška, also spoke. In his speech, the faculty dean, Professor Danko, evaluated what the faculty had achieved in the previous year and emphasized the common goal of raising the level of quality in all areas of the faculty’s operations. In conclusion, the academic year at the faculty was officially opened. 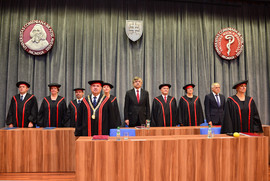 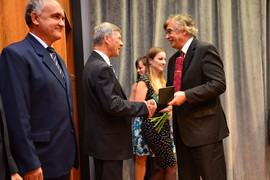 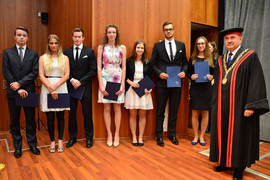