“The commencement of the 98th academic year represents a new level to our university structure, which needs fewer than three more steps before we commence the second century of our existence. I gladly welcome our first-year students to the university, who, along with the rest of us, will contribute to this building process. It is up to you what our university pyramid will look like when we celebrate our 100th anniversary and what sort of reputation and prestige we will enjoy both domestically and abroad,” said Comenius University Rector, Professor Karol Mičieta, in the introductory part of his speech.

This year the university is offering students a total of 789 study programmes, with a number of them being taught in foreign languages. “Even though enrolments are still continuing, as of today we have nearly 24,000 students already enrolled, including 22,000 in full-time study, 5000 first-year students, and 2000 international students,” said the rector as the university’s highest representative.

The rector informed the audience about the university’s bilateral partnerships and the growing number of places in the Erasmus+ mobility programme. Over the last seventeen years, the university has sent around 6000 students abroad. The last academic year saw 620 Comenius University students travel abroad and 420 Erasmus students from abroad come to the university for a study stay.

In his speech, the rector did not leave out the issue of inadequate research funding: “The basic problem of Slovak university education is that it is not sufficiently financed, which is a fact that has been confirmed by known OECD statistical data. Slovakia suffers from a low level of investment in science, and, in contrast to developed countries, the private sector contributes only a small amount of financial support for scientific research. Slovakia still lacks a clearly formulated concept of developing science and research which would connect basic research with its application and where the results would contribute to innovation and an increase in competitiveness in the international environment,” he stated, adding that despite these obstacles the university still has a number of talented researchers and still engages in world-class scientific work.

“We present ourselves to the world as a research-based university of growing significance in the Central European region. It is necessary to increase our openness to the international environment, increase the quality of training of our young scientists, and reflect on the needs and demands of the workplace as well as the dynamic changes in the environment. We have to prepare them for life itself! Students in doctoral study programmes are the propelling force of research, and there must be more than just a qualitative change of the doctoral study system; attention must also be paid to their evaluation and career development,” the rector emphasized.

The 2016/2017 academic year, which started today at Comenius University, is the 98th year of tuition at Slovakia’s oldest university. Over its existence so far, nearly 200,000 students from Slovakia and abroad have graduated from the university. 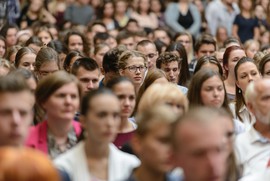 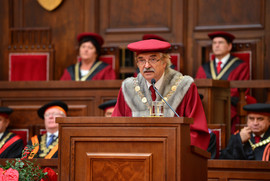 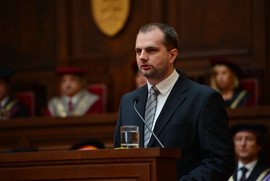 Jozef Jurkovič, the General Director of the Higher Education Section at the Ministry of Education, Science, Research and Sport of the Slovak Republic 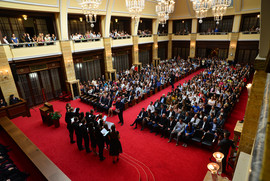 The Comenius Choir from the university’s Faculty of Education (Photos: Vladimír Kuric)