On 27 September 2016, Comenius University started a new tradition in the space and facilities of the Ľudovít Štúr Campus–Mlyny in Bratislava’s Mlynská dolina neighbourhood. The unique Amosfest students’ festival took place, having the main aim of bringing students, staff, and graduates from various faculties of the university together in one time and space, and thus strengthening what the university means to them. The event also aimed to raise the profile of various students’ associations operating at the university.

The first year of the festival began with an informal discussion with the Minister of Education, Science, Research and Sport of the Slovak Republic, Professor Peter Plavčan, who answered students’ questions dealing with such things as the financing of education and the evaluation of universities. Accompanied by the Comenius University Rector, Professor Karol Mičieta, the minister then looked over the presentations of various students’ associations and organizations (the Student Council for Higher Education, the Bratislava Medical Students’ Association, the European Law Students’ Association in Bratislava, the Erasmus Student Network at Comenius University, the Slovak Pharmaceutical Students’ Association, the Slovak Association of Dental Students, the MC2 student television station, the J. M. Hurban Evangelical Association, the Bratislava Debating Society, and Slovak Students For Liberty) who all enrich university studies with their various activities.

Then there was a cooking workshop with Vanda, which showed those present how to simply prepare tasty and healthy food. Simona Bubánová, Ivan Štefunko, Šimon Šicko, Ľubomír Vančo, and Vladimír Mužík also discussed how to make a business out of a good idea. In his own address, the rector then praised the activity of the students’ section of the Comenius University Academic Senate and the special nature of events of this type, and he gave some words of encouragement to the student body.

Slovak Olympians and Paralympians who had represented the country in Rio talked about their experiences at the games and about the great effort it takes in order to qualify for such a top-level event. They even allowed their medals to be passed around the audience. The series of workshops and discussions was concluded with a travel film on the adventurous expedition of Vladimír Štrba and Zoltán Pál, who chose to conquer Mount Everest by going the “Hard Way”.

The spiritual side of the event was catered for by the university’s Faculty of Roman Catholic Theology of Cyril and Methodius, which held a service in the St Joseph Freinademetz Pastoral Centre focusing on the festival’s participants, all students, the university, and the new academic year.

The festival’s diverse musical programme was taken care of by Snowdrop, Walter Schnitzelsson, La3noCubano, Malalata, and the world-class DJ, B-Complex. Thanks to the music, students and friends of the university could then unwind and have fun in the proper manner.


More information on Amosfest can be found in the October issue of the Naša univerzita (Our University) magazine. 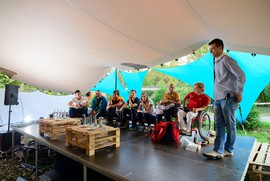 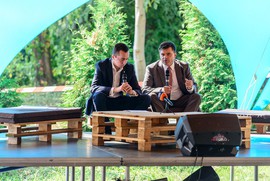 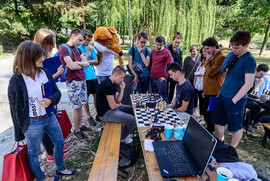