Bratislava, 18 November 2019: Today the rector of Comenius University, Marek Števček, awarded twenty-five participants in the events of November 1989 who had been students at that time. Ladislav Snopko and Valér Mikula received Comenius University Gold Medals for their endeavours during and following the revolution. All of these awards were presented at the annual awards ceremony for outstanding students and teachers at Comenius University on the occasion of International Students' Day.

Dionysus Hochel, Henrieta Hrinková, Milan Novotný, and Radoslav Števčík, who as students had founded the First Strike Committee in Slovakia on 20 November 1989, were awarded the Commemorative Medal for the 100th anniversary of Comenius University. On 16 November 1989, students of the Faculty of Arts organized a spontaneous and unauthorized demonstration for freedom, democracy, freedom for political prisoners, educational reform, and a public dialogue on the problems of society. They were joined by other university and secondary school students in Bratislava, and they started their activity one day before their compatriots in Prague. Among the recognized former students were other participants in the events of November, including Pavel Neogrády, who is currently a lecturer at the Faculty of Natural Sciences.

A Comenius University Gold Medal was awarded to Ladislav Snopko, an archaeologist, activist, and former Minister of Culture, for his contribution to the promotion of freedom and democracy in Slovakia during November 1989 and particularly for his cultural organizing of daylong events of the Velvet Revolution. The literary critic and longstanding lecturer at the Faculty of Arts, Valér Mikula, received the Gold Medal for his personal courage and support of the Student Movement and his principled democratic civic and academic attitude in November 1989 as well as in the following years.

“Without the students – those in Prague and in Bratislava – there would have been no Gentle or Velvet Revolution. They were the spark that set it all alight. They were the ones who awakened the sensibilities of the general public,” Mikula said. “This auditorium has experienced many events in its history: famous ones, less famous ones, and infamous ones. In my opinion, the most glorious moments in its entire history were those lively student meetings from Monday 20 to Wednesday 22 November back then. Standing here in front of the microphone thirty years ago was a feeling that comes once in a lifetime. There was excitement, tension, and emotion as well as fear and uncertainty mixed in with determination, indignation, and a decisiveness about what we do not want. We experienced all of that right here,” he recalled.

At this event, thirty students received annual awards for outstanding academic achievement, abilities, and talent. Also, thirty teachers who had contributed to their students’ scientific, artistic, and professional achievements were recognized.

Awards went to a student of informatics who won a robotics contest, a medical student who is examining a new method of abdominal movement in combined breast reconstruction, a theology student who was an animator at a camp for refugees from Eritrea and the Philippines in Jerusalem, a student of religious studies who is researching Mayan ceramic art from Guatemala, and a national representative in bodybuilding and fitness. The awarded teachers included the lawyer Jozef Čentéš, the artist Alojz Drahoš, and the psychologist Anton Heretik.

The awarded participants from those revolutionary days of November 1989 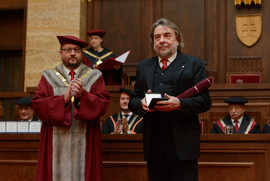 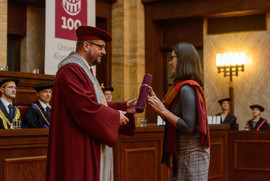 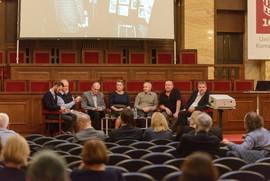