Bratislava, November 25, 2019: Michal Fečkan, a mathematician from Comenius University in Bratislava, is one of the world's best. This month he received a prestigious Highly Cited Researchers award for the number of times others have cited his work. The award list includes 6217 high-ranking researchers from nearly sixty countries who are among the 1% most cited scientists in their field in the world. The survey was conducted by Clarivate Analytics from the Web of Science Group, which currently owns and operates a collection of scientific resources, including the prestigious Current Contents database

Professor Michal Fečkan works at the Department of Mathematical Analysis and Numerical Mathematics at the Faculty of Mathematics, Physics, and Informatics at Comenius University. He specializes in nonlinear functional analysis, and dynamic systems and their applications. There is much interest in his contribution to the analysis of solutions of equations with fractional derivatives. Fečkan has written several scientific monographs that have been published at top international publishing houses. He is also the guarantor of the master's study programme of managerial mathematics and of the doctoral programme of numerical mathematics. He was 2017's Scientist of the Year. With a Hirsch index score of 25, Fečkan has been cited a total of 2314 times.

Professor Fečkan is the only Slovak to be included in the ranking for 2019. Hungary has one scientist in the ranking, Poland has six, Russia has ten, the Czech Republic has fourteen, and Austria has fifty-five. The largest representation of scientists in the ranking is taken by the United States (2737), followed by China (636), and the United Kingdom (516). "I am sure that the results and recognition given to Michal Fečkan will serve as encouragement for other scientists at the university, and that in the future we will have more Slovaks in this prestigious ranking,” said the rector of Comenius University, Marek Števček. The university's executive body has approved the awarding of a Comenius University Gold Medal to Professor Fečkan to take place on 10 December.

“High-quality scientific work takes place in Slovakia, as is shown by great scientists and teachers such as Michal Fečkan. I think it is essential for teaching and scientific work to be closely linked,” said the dean of the Faculty of Mathematics, Physics, and Informatics, Daniel Ševčovič. “This award is an expression of the extraordinary international recognition of the work and results of Professor Fečkan and the Faculty of Mathematics, Physics, and Informatics at Comenius University. It is pleasing that our faculty, university, and Slovakia is represented in this prestigious club,” he added. 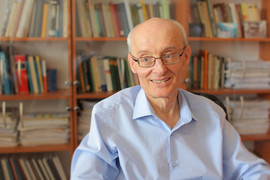