When the courage of young people helped bring freedom to all

The series of events that are being remembered today began in Prague on 28 October 1939 on the anniversary of the founding of the democratic Czechoslovak state, which had ceased to exist half a year previously. Massive anti-Nazi demonstrations took place in occupied Prague, and their violent suppression had tragic consequences. Václav Sedláček was shot dead and medical student Ján Opletal would die from serious injuries. His funeral on 15 November 1939 saw thousands of Czech university students, including many Slovaks, take to the streets to protest and resist the totalitarian regime.

The Nazi retaliation was brutal. On 17 November 1939, they forcefully entered the dormitories, including Štefánik Dormitory, which was the  centre of Slovak student life in Prague, and on the same day they executed eight student leaders and one professor. Hundreds of students were deported to concentration camps, and all Czech universities were closed.

News of this barbaric attack on education provoked outrage around the world, and students in Slovakia organized assistance for their Czech counterparts. The freshly lit flames of the Second World War also became a struggle for the freedom of science and universities.

On the initiative of the Czechoslovak foreign resistance, the anniversary of 17 November 1939 became International Students' Day. This was supported by a number of prominent personalities, including Eleanor Roosevelt, the wife of the US president, and was recognized in schools around the free world.

Fifty years later on 16 November 1989, a spontaneous and unauthorized demonstration of students from Comenius University took place in Bratislava. A few hundred young people formed a living chain, shouted political slogans, and boldly walked to the Ministry of Education, where their protest ended in an unexpected discussion with a Communist bigwig.

On Friday 17 November, a memorial gathering was organized by university students in Prague, which started with the lighting of candles at the tomb of the poet Karel Hynek Mácha. This peaceful gathering turned into a march by thousands of students into the centre of Prague, where there was a brutal response by the police. Hundreds of beaten young people ending up with serious injuries in hospital. This was the beginning of the end of the Communist regime in Czechoslovakia.

Culture, memory, and education as a guarantee of humanity

It is a remarkable thing that the beginning of the events of November 1989 were marked by culture and an effort to preserve the memory of a poet and the students of 1939, who had confronted evil, injustice, and persecution. One of the historical legacies which we want to and must remember is that culture, memory, and education form the foundation that can sustain and preserve the universal values of justice and freedom despite decades of police brutality and political totalitarianism.

As academic officials, we are responsible for the future of science and university education and for preserving the memory and legacy of the past. We realize that students and young people are the driving force in our modern history and have been able to change even that which seemed impossible.

We shall always remember them and we strive to truthfully preserve their legacy within our institutions. At this moment we wish to express our respect for all those students and young people who, under the threat of repression and brutal violence, and in situations where others wished to deprive them of their very future, were able to stand up for what they believed in and for the values of democracy and freedom in order to defend humanity and decency from malevolence and violence.

We hereby express our respect for the courage and suffering of those who stood up so that everyone may have freedom.

Miroslav Fikar, rector of the Slovak University of Technology

Pavol Šajgalík, president of the Slovak Academy of Sciences 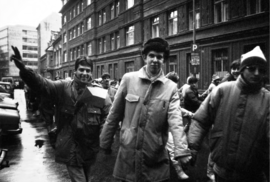 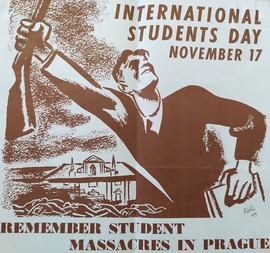