“This year it was a close contest; our team gave it 100% from the start. Our rivals managed to overtake us after the start, but through our combined efforts we got ourselves back into a winning position,” said the coxswain of Comenius University’s rowing eight, Michal Clementis. The Comenius University also included Lukáš Babač, Ondrej Kovačovič, Peter Legény, Peter Lejko, André Rédr, Barbora Sagová, Maroš Sloboda, and Matej Šmída.

“Our university’s rowing eight confirmed their quality against a strong competitor, which is proven in the six-second winning margin,” said Comenius University Rector, Professor Karol Mičieta, who congraluted both teams on their great performance.
The event included a mini-regatta, where four-member teams competed against each other on rowing machines; the winning team was Policajti from the Academy of the Police Force in Bratislava. 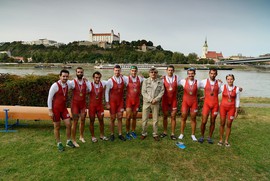 Comenius University Rector, Professor Mičieta (in the centre) with the CU rowers 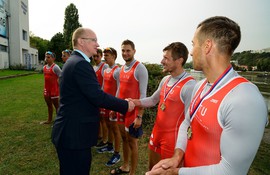