Bratislava, 14 September 2016: For the fourth time, Comenius University will prove its "rowing prowess" in competition with other universities in Bratislava. This will all happen in this year’s University Regatta, which will take place on Saturday 24 September 2016 and which will finish at the Slovak Rowing Club boathouse situated at 24 Viedenská cesta.

This year’s regatta is being organized by Comenius University’s Faculty of Physical Education and Sport. The sporting highlight of the day will be the rowing eights race on the Danube, which will start at 3.00 pm at a point which is 1876 kilometres from the mouth of the river and which will finish at the Slovak Rowing Club boathouse in Bratislava.

In addition to the rowing eights, university teams will test each other on rowing machines in a so-called "mini-regatta". The entering of teams and their presentation will take place on Saturday 24 September from 11.30 am to 12.30 pm in the Slovak Rowing Club boathouse. The mini-regatta will take place from 1.00 pm to 3.00 pm. Four-member student teams may enter, with each team having at least one woman. Each member of the team will row 500 metres on the rowing machines.

Participants in the regatta of rowing eights from Comenius University and the Slovak University of Technology, which will start at 3.00 pm, will have to race each other over a six-kilometre stretch of the Danube. The expected time for completion is around 20 minutes. The official results will be announced at 4.00 pm.

The Comenius University rowing eight, who proved their superiority for the third time in last year’s race, are the holders of the challenge trophy. "I am sure that our string of success will continue this year as well. I am already wishing our rowers much luck," said Comenius University Rector, Professor Karol Mičieta, with a smile. According to him, the University Regatta is a pleasant diversion from the competition among Bratislava’s universities in the areas of science and education. 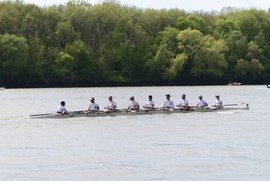