Bratislava, 7 September 2016: Comenius University is once again the only Slovak university to have been included in the QS World University Rankings. It was once again placed in the 651st to 700th ranking band.

The first three places in the rankings went to the Massachusetts Institute of Technology (1st), Stanford University (2nd), and Harvard University (3rd).

The QS World University Rankings, which were published for the first time in 2004, collected data from 4332 universities for the current rankings and then evaluated the top 916 universities in the world. The results were published on Tuesday 6 September 2016.

“International rankings are one of the ways that the education, research and scientific output of universities are measured. They are important to us as a means of comparing ourselves to universities abroad, and they offer an incentive for us to continue improving in our work. These rankings show that in spite of inadequate financing, our scientific activity and quality of tuition is of a world-class standard,” said Comenius University Rector, Professor Karol Mičieta. 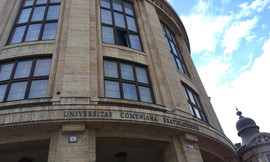