On 31 August 2016 the last lecture of the 14th Children’s Comenius University (CCU), a highly popular summer school, took place in the Comenius University Auditorium on Šafárik Square. After the lecture, the students had a graduation ceremony where each of them received a diploma.

Why is money “for free”? This question was encoded into the title of the last CCU lecture, and an answer to it was sought by Associate Professor Jozef Makúch, the Governor of the National Bank of Slovakia. At the beginning of his lecture, Makúch explained the origins and development of money to the young audience. He then focused on the activities of the European Central Bank and the Eurosystem, which have the primary role of ensuring price stability. Using a short film, Makúch explained what formed the basis of inflation and deflation as well as the importance of having them regulated. According to Makúch, a key role here is played by decisions made by the European Central Bank in setting interest rates. After the lecture, a number of questions were asked by the curious young audience; Makúch gave answers to such questions as why there was no €300 banknote, how much it cost to make a €500 banknote, and when the new €50 banknote would enter circulation.

Following the lecture, there was a graduation ceremony for the young students. “You are taking away with you a lot of answers to your questions, the enjoyment of an adventurous and exciting journey of knowledge and discovery, new experiences and friendships, and a lot of fun. I hope that when you are older, you will keep something of this true children’s joy, fantasy, curiosity, and playfulness,” said Comenius University Rector, Professor Karol Mičieta, who also thanked everyone who had contributed to making this year’s CCU possible. He wished the young graduates much success and happiness both at school as well as in life, and he congratulated them on receiving their CCU diplomas.

The CCU was established in 2003; this year it welcomed around 350 students between nine and fourteen years of age. Every Wednesday over the summer holidays, the children attended a lecture – a total of nine were held – which sought to answer questions such as why autumn is such a colourful season, why humans perceive both space and time, and why aircraft do not fall out of the sky.

The series of lectures was enriched by a number of events and workshops, which ranged  from workshops focusing on communication and debating skills, IT and hip-hop; excursions; creative workshops held in the Slovak National Gallery, the Slovak National Museum, and the Slovak Philharmonic; and a trip by boat to the Danubiana Meulensteen Art Museum. The CCU students also visited Energoland in Mochovce, the outdoor school at Planinka, and the Volkswagen manufacturing plant. They also traditionally showed a great interest in the Question Hour held at the National Council of the Slovak Republic.

More information about the lecture and the whole 14th Children’s Comenius University can be found in September’s issue of Naša univerzita. 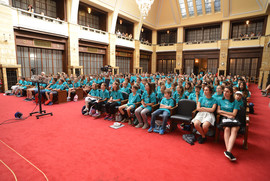 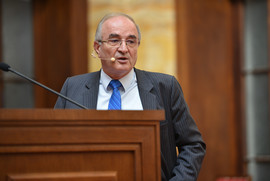 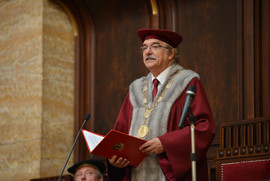 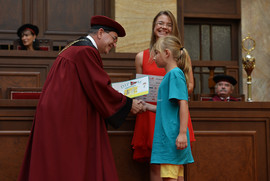