At a ceremonial meeting of its Scientific Council on Thursday 20 October 2016, Comenius University’s Faculty of Law celebrated 95 years since it began operations. The dean of the faculty presented ceremonial medals in honour of this occasion.

“The Faculty of Law was one of the new university’s four pillars embodied in its core faculties. It became a part of university and law education history in Slovakia as the oldest institution dealing with scholarship concerning the state and the legal system. In the history of Czechoslovakia and today’s Slovakia, the faculty has played a unique role. If we were to take into consideration the number of the highest constitutional authorities who have studied at the faculty, then there is simply no other faculty that can compete in Slovak history since 1989. It is a similar case with the legacy left by the generations of brilliant lawyers who have created Slovakia’s legal environment,” said Comenius University Rector, Professor Karol Mičieta, in his address to the audience.

The event was attended by the Minister of Education, Science, Research and Sport of the Slovak Republic, Professor Peter Plavčan, who said: “I am very glad to have been invited to this meeting of the Faculty of Law’s Scientific Council at Comenius University, because the faculty is a fundamental pillar of Slovak scholarship and scientific endeavour.” He thanked the faculty for its work with the ministry to date and expressed the conviction that this form of cooperation would be further developed in relation to the need to create a lot of legal regulations regarding the preparation of educational reform.

The faculty’s cooperation was also praised by the State Secretary for the Ministry of Labour, Social Affairs and Family of the Slovak Republic, Mr Branislav Ondruš.

“The Faculty of Law at Comenius University must be the one which highlights problems affecting all of society and which takes an exact and clear stance,” said the Faculty of Law Dean, Associate Professor Eduard Burda.

This special event saw the faculty approve the establishment of the Faculty of Law Alumni Club, which will function as an informal association of graduates with the main purpose of deepening their ties to the faculty, organizing events involving graduates, and creating a motivational environment for students as well.

Part of the event included a commemoration of Professor Augustín Ráth, who was the first dean of the faculty and the university’s first Slovak rector. On 24 October 1921 he gave the first ever lecture at the faculty. Professor Ráth was one of the most important Slovak legal theorists in the interwar period who dealt with issues concerning the philosophy of law and the sociological aspects of law.

The 95th anniversary of the faculty is also being honoured with a two-day international conference, The 2016 Bratislava Legal Forum, which is taking place on Friday 21 October and Saturday 22 October 2016.

More information about the history of the Faculty of Law 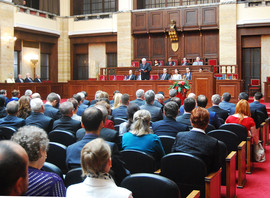 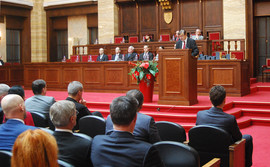 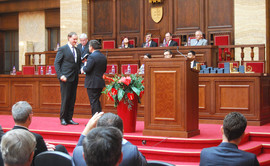