Bratislava, 28 June 2021: After a two year hiatus graduation ceremonies will be held again at the Comenius University Auditorium. By the end of July, around 2,000 new Masters and Doctors will be ceremonially presented their diplomas. Due to the pandemic, however, the ceremonies will take place under specific public health conditions, capacity restrictions, and their duration will be shorter.

Students of CU’s Faculty of Management were the first to receive their graduation diplomas in this celebratory setting of graduation ceremonies at the largest Slovak university since the start of the pandemic, while CU Rector Marek Števček was also attending. "I am very pleased that the current favourable epidemiological situation allows us to organise graduation ceremonies for those students who want to participate in them. I know that these events mean a lot to many students and their relatives. That was the main reason why I decided to reopen this tradition after last year’s ceremonies had to be cancelled, even under modified conditions," says the Rector of Comenius University.

At the moment the maximum capacity of the CU Auditorium is limited to 150 persons and up to 40 graduates can attend one ceremony. Each graduate is allowed to invite two guests. The university reserves 30 places for its representatives - the rector (who can be represented by the vice-rector), the dean, vice-deans, representatives of the department or institute, the carrier of the sceptre and the study department organisers. Some faculties have decided to hold graduation ceremonies without guests, which allows them to present graduation diplomas to more than 40 graduates at once. Face-masks are mandatory and graduates can only take them off only during the ceremonial vows and diploma presentation.

Family or friends who are unable to attend the ceremony can watch a live online broadcast from the Auditorium on the University’s YouTube channel. Recorded ceremonies will remain available online.

During June and July, graduates of ten out of the thirteen faculties of CU will be able to attend their graduation ceremonies - the doctors from Bratislava and Martin, philosophers, teachers, nature scientists, pharmacists, managers, protestant theologians, mathematicians and physicists, and sports teachers. The schedule will probably change before the end of the summer as many students opt out of the ceremonies.

During the ceremonies themselves the Slovak anthem and the graduation hymn 'Gaudeamus Igitur’ will be played. By uttering the words spondeo ac polliceor the students swear on the rector's sceptre to defend the interests of their alma mater, refrain from dishonouring the obtained degree and be motivated in their efforts by an intention to spread the truth, rather than to obtain a profit.

The ceremonial nature of the events is underlined by attire, which should be formal. Ladies can choose a dress that covers the shoulders and is not shorter than slightly above the knees. Thin panty-hose and closed-toe shoes are reqiured. For gentlemen, a suit with a tie and closed laced shoes are most appropriate. 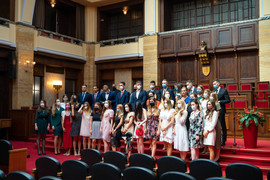 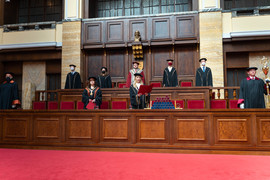