Bratislava 13 August 2021: From 1 September 2021, Comenius University will be using a new logo which depicts its building on Šafárik Square. The university collaborated on the design with the GoBigname studio. The studio’s creative director Michal Pastier was included among the Top 100 European innovators by Google and the Financial Times. Having received more than 200 creative awards, he is one of the most acclaimed creators in the region. On special occasions, the university will continue to use its historical emblem depicting John Amos Comenius.

Comenius University Bratislava is the oldest Slovak university. It has been using the logo with the appearance of John Amos Comenius since 1969. In 2008, the logo was redesigned and two more versions of it entered use: a frontal view and a profile. On the university’s centenary in 2018, a logo showing the university’s main building was added. After the celebration of the centenary the question arose which of these symbols should be kept by the university and what uses they should be given.

"I graduated from the Department of Marketing Communication at the Faculty of Arts and for years me and my colleagues were discussing the need for a more distinguished presentation of our university. That is why I was very pleased with this initiative of Comenius University Bratislava," said Michal Pastier, creative director at the GoBigname agency which developed the redesign. "We collaborated with Ondrej Jób, holder of the Certificate of Typographic Excellence awarded by TDC New York, and Rudolf Letko, a top graphic artist, to create a new visual philosophy of the university. It is based on a monolinear design which allows the placement of the logo on different backgrounds. It is more suited to the online world than the current symbols, and that is where communication is currently moving," added Pastier.

The whole project involved a new university logo, a redesign of the logos of its thirteen faculties and eight units, a new set of typographic tools, a redesigned colour palette, a new visual language for social network outreach, and a number of document and application templates. The university hopes that the change will contribute to greater brand recognition and to clearer communication.

"The new visual identity builds on the time-honoured symbols of our faculties and of the university, while paying respect to our traditions. The form we chose for our presentation will allow us to differentiate ourselves and visually connect the entire university," said Radomír Masaryk, the Vice-Rector of Comenius University who coordinated the project. "We want our publications, stands at academic fairs, invitations to events and other documents to communicate clearly that they belong to the largest Slovak university."

"I am very pleased that we managed to complete this two-year effort, and that today we can present the new, modern visual identity of Comenius University to our students, staff and the general public. The new visual identity arrives in turbulent and unprecedented times of a pandemic. However, it is the result of dozens of meetings at various university forums and hundreds of hours of work done by the GoBigname agency and the team led by Vice-Rector Masaryk. I would like to thank all those who contributed - you successfully gave shape to an abstract idea and created an attractive visual identity which will strengthen the unity of the university", said the University Rector Marek Števček. "Today, perhaps more than ever, it is necessary to harmonise our work, our results, and our academic community both in content and in form... We must ensure adequate presentation of cutting-edge science and high-quality education, and while any change will always encounter some resistance, I am convinced that the new logo will be received positively and will contribute to our persistent effort to promote quality and build pride in our university." 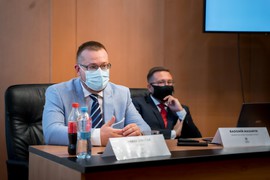