Scientists baffled by a bizarre lizard

Bratislava, 15 June, 2021: Last year an unprecedented discovery was reported in the scientific journal Nature. The paper described the smallest dinosaur yet, no larger than a hummingbird, whose skull was only 17 mm long. The discovery is now being contested in Current Biology by a team of scientists which also includes palaeontologist Andrej Čerňanský from Comenius University Bratislava.

The fossil was found in Cretaceous amber from northern Myanmar which is 99 million years old. An unprecedented discovery - the head of a tiny dinosaur preserved in amber, made world news. The new animal was named Oculudentavis khaungraae. That classification, however, later turned out to be incorrect.

"It was not a dinosaur, but a very bizarre lizard - belonging to a group which includes present-day lizards, but also chameleons and monitor lizards," explains Andrej Čerňanský, an evolutionary biologist and palaeontologist from the CU. "It certainly resembles a tiny dinosaur - with its large eyes, an elongated preorbital area, jaws full of pointed teeth and a short, vaulted braincase" he adds.

The authors of the original paper published in Nature made several mistakes. In phylogenetic analysis, which examines the relations among species within evolutionary lineages, they used a matrix consisting only of dinosaurs and birds. The latter, as we know today, are a lineage related to the dinosaurs. And so, for a moment, the little lizard became a dinosaur.

The paper was eventually retracted by the authors after doubts were raised by the international team, whose member is Andrej Čerňanský. Yesterday, the team, led by Juan Daza of the Sam Houston State University in Texas and Susana Evans from the University of London, published a revision of the original discovery and a description of the latest, new fossil of the animal. The team proves, beyond all doubt, that the animal is by no means a dinosaur, but a lizard belonging to the group of scaly reptiles.

The first fossil only consisted of the animal's head whereas the new specimen also includes a short portion of the spine and shoulder bones. The latter are typical for, among others, lizards rather than dinosaurs. The new fossil also has a distinctive, pinched longitudinal ridge on its nose. However, this may have been a variation in males. In addition, if the ridge was more vividly coloured, it could have been used for communication. The fossil also differs in other details and so it was given a new name Oculudentavis naga. It probably subsisted on small prey.

Myanmar, where the fossils were discovered, is now part of Asia, but it once formed an isolated island. It was covered in humid Araucaria forests and the trees produced a large quantity of resin which solidified into amber over time. Because of this we can now study prehistoric, long-lost creatures, whose untouched bodies were preserved in resin for millions of years. 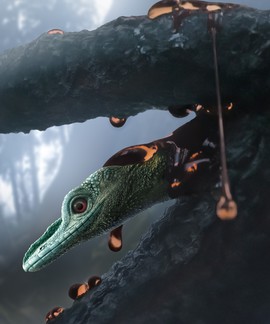 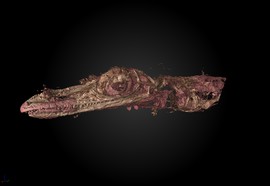