Bratislava, 18 June, 2021: This week, Comenius University Bratislava achieved twofold success in a worldwide ranking. It consistently places in the top 300 - 400 world universities in Round University Ranking by subject. Yet again, it is the only Slovak university which made it.

The ranking is published by the RUR rankings agency in cooperation with Clarivate Analytics, whose activities focus on analyses in the field of scientific and academic research published in peer-reviewed journals. The ranking is one of several world rankings which evaluate research universities. 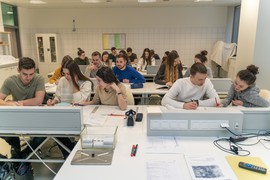