The Nobel Prize in Physics was awarded to the British scientist Sir Roger Penrose today for his black hole breakthrough. He will share the prize with the German astrophysicist Reinhard Genzel and the American astronomer Andrea Ghez. Last year he visited Comenius University.

Oxford University professor Sir Roger Penrose won the Nobel Prize for his discovery that the general theory of relativity predicts the emergence of black holes.

Last year he made a trip to Slovakia and on 15 February he visited Comenius University to hold a public lecture in the CU Assembly Hall titled "Do we see Hawking points in the cosmic microwave background?". During the lecture he presented a discovery that he co-authored, which supports the theory of a recurring history of the universe. The Rector of the University, Marek Števček, awarded him the Commemorative Medal issued on the occasion of the 100th anniversary of the founding of Comenius University. 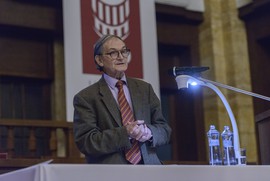