Bratislava, 6 October 2020: The Falling Walls Lab Slovakia 2020 once again put the spotlight on exceptional projects by young innovators from various fields of science. The international jury agreed that the most impactful project was submitted by Ing. Michal Takáč from the Technical University in Košice. His idea is to teach maths in a virtual reality environment, breaking the walls of traditional math teaching.

The traditional way of teaching maths is based on a sequence of steps and procedures while the more abstract concepts in mathematics are not linked very well to real-world scenarios. This may discourage students from taking up mathematics. "The world we live in is dynamic, rather than static. Mathematics can describe its phenomena beautifully," says Michal Takáč. He presented his project called MathWorldVR which introduces innovative methods of teaching mathematics in virtual reality.

Mgr. Klaudia Kyselicová, PhD., from Comenius University Bratislava, who studies the link between fingerprints and disorders on the autism spectrum was awarded second place. The results of her research indicate that the fingerprints of people with an autism spectrum disorder are specific enough to detect the presence of a neurodevelopmental disorder. "If we compound these physical markers with behavioural manifestations, we can arrive at a predictive model which allows us to predict the risk of ending up on the autism spectrum," explained Klaudia Kyselicová. Her research could be particularly helpful in an early diagnosis of young children.

The third place was awarded to RNDr. Matej Baláž, PhD., who conducts research into mechanochemistry. It is a more environmentally acceptable alternative to the usual "solution-based" chemistry. "Powdered reactants are introduced into the grinding chamber and by purely grinding them by special grinders - without the use of any solvents or externally increasing temperature or pressure - we can often obtain better results than through traditional chemistry," says the scientist from the Slovak Academy of Sciences. This method can be used to manufacture nanomaterials required by the energy industry (e.g. in solar cells or thermoelectric materials) or in biological applications. An alternative use is in waste recycling.

Due to the pandemic, the event had to take place in an online form, just like in other countries. "We are very pleased that neither the pandemic nor the virtual format discouraged our excellent young scientists. The contributions which were awarded the first three places are excellent on an international level. The winner will represent Slovakia very well," thinks the chairman of the event prof. RNDr. Peter Moczo, DrSc.

The winner of Falling Walls Lab Slovakia 2020 will represent Slovakia at the international finals of the "Emerging Talents" category in the new digital format titled "The Falling Walls Breakthroughs of the Year". The finals will last several weeks during which innovators from all over the world will present their cutting-edge and innovative ideas and projects. This will be followed by shortlisted international finals which will culminate by awarding the title "FW Breakthrough of the Year". The title holder will be announced online in the grand finale of Falling Walls which will take place during the Berlin Science Week on 9 November, 2020.

You can find more information, as well as a gallery of videos from this year's event at the FWLS website. 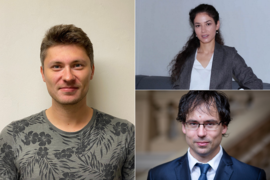