The positions that member countries advance in energy security on the EU level do not depend on their actual energy situation but rather on how their representatives perceive this situation in their countries. This is one of the findings from the latest research by Comenius University political scientist Matúš Mišík, Ph.D., who examined the development of cooperation in energy security on the EU level. The issue of energy security remains one of the main themes of discussion in the EU and during Slovakia’s presidency of the Council of the EU in spite of the current turbulence in the political situation.

If national representatives consider their country’s energy situation to be problematic, they will try to shift competences to the EU level in order for their national energy security to be taken care of. "This means that even those member states that have a relatively good infrastructure can nonetheless try to shift competences in the energy sphere to the EU so long as national representatives still have doubts about their country’s ability to successfully ensure energy security," says Matúš Mišík from the Department of Political Science at the Faculty of Arts, Comenius University.

His analysis showed that this is Slovakia’s particular situation. By contrast, Austrian representatives consider their country to be capable of dealing with all questions regarding energy security and do not have any interest in shifting more competences to the European level. The Czech Republic is in between these two poles and supports a limited form of integration in the area of energy security. "This argument is also important for the future development of energy infrastructure – not even new gas pipelines will necessarily lead to an automatic change in the position of member states on energy security if it does not change the perception among national representatives of the energy security situation in their countries," Mišík pointed out.

"Research into the development of cooperation in the area of European energy security also needs to be perceived in the context of the priorities of the Slovak presidency of the Council of the EU. I am sure that in terms of the vision of a united Energy Union these results will contribute to achieving our presidential goal of having safe and clean energy at an accessible price for consumers," said Comenius University’s Rector, Professor Karol Mičieta.

Mišík’s work, whose results has been published in the prestigious journal Energy, is the result of a number of years of effort and extensive research which examined energy security in three central European countries – Slovakia, the Czech Republic, and Austria. It is based upon dozens of interviews with representatives from these countries on both a national level as well as within European institutions. His work is also an example of the inclusion of Slovak research into top-level academic discussions on energy security.

This research was supported by the Slovak Research and Development Agency (grant APVV-0484-10) and the Faculty of Arts at Comenius University (grant FG06/2016). 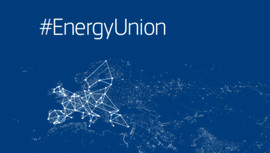